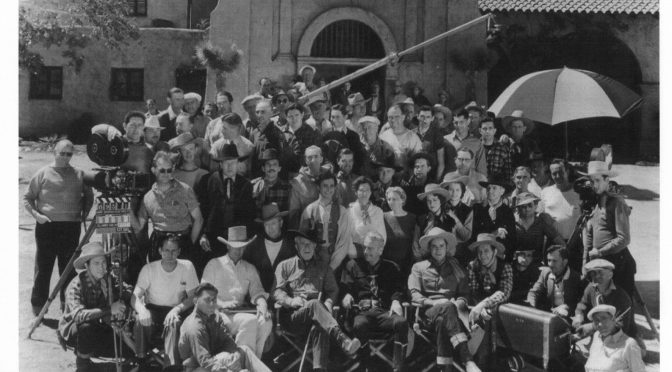 The Eastern California Museum announces their 2021 historical photo calendars are now available. They’ll make great Christmas gifts for lovers of the area. Each month has a great photo of days gone by.

The January 2021 photo (above) is of the entire Hopalong Cassidy film crew posing; grips, craft services, directors, script girls, and yes . . .even actors.

A little Lone PIne – Hoppy history. . . Although Lone PIne is still a hot bed on-location commercial and film production,  it is nothing like the magnitude of back in the day, as seen in the calendar’s photo.

Many of the 71 Hoppy films produced from 1935 to 1948, were shot in Lone Pine’s Alabama Hills. Hoppy’s Bar 20 Ranch House still exists south of town (although the exterior has been remodeled.) Further up the canyon, Hoppy’s cabin is still mostly standing, but has been unoccupied for years.

In 1931, on his way to becoming one of Hollywood’s leading men, his photo was mis-printed on the front page of the Los Angeles Herald Examiner when another actor, William Stage Boyd, was arrested on gambling, liquor, and under age sex charges.

His career over, Boyd spiraled into a drunken stupor. In 1935, a former producer he had worked with found him drunk on the beach in Santa Monica, and offered him a role as a new western character, Hopalong Cassidy. But Boyd had to promise to first get sober.

He did.  From that day on, Boyd never touched a drop of alcohol. For decades he exemplified and embodied the western code of the good guy, even though he wore a black hat. On screen he never started a fight. But he finished every one the bad guys started,  protecting the little guy and oppressed westerners.

Eastern California Museum calendars may be ordered through the museum by phone or email (ecmuseum@inyocounty.us) for $13.00, includes tax and shipping. Or purchased directly at Dwayne’s Friendly Pharmacy, Spellbinder Books, and the Bishop Chamber of Commerce.