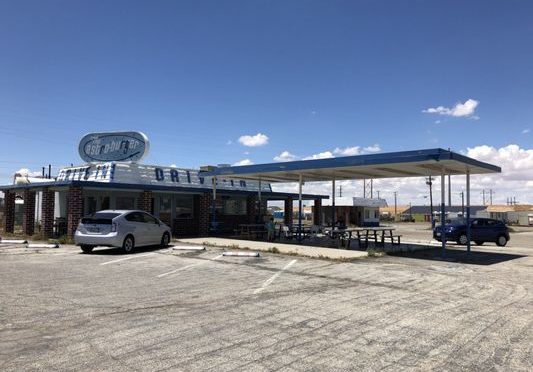 A must-stop for thousands of travelers on Highway 395, to and from the Eastern Sierra, has closed its doors for good.

Astroburger, at Four Corners (Kramer Junction) will be raised for a new ARCO station.

Although the building  had become dilapidated over the years with weeds in the parking lots, lack of signage, and unsure-of hours, it still drew a crowd on Sunday afternoons for visitors returning from mountain and or desert trips, enjoying Astroburger for the milkshakes and all- American fast food.

Astroburger’s heyday was during the early formation of the 1970s Space Shuttle program at nearby Edwards Air Force Base, where many of the early shuttle  components were built and tested.

The opening last year of the long-awaited Hwy. 58 bypass, a four lane freeway, that now avoids the once dreaded Four Corners stop signals, and the sometimes hour-long back up for Mojave to Barstow run, was the death of the iconic drive-in.

Pressure has been put on the Larrs Family, who owns most of the Four Corners property, to bring additional business off the new freeway into the small business area to support their leasees. Especially in light of the new super-sized Love’s Truck Stop being built one exit west, in Boron.

The possible four-drive-thru site project will also eventually eliminate the Pottery Shop on the Northwest corner of Old Hwy 58 and Hwy 395. ARCO is the first business committing to the project. (An older ARCO station found itself on the dead end road to nowhere with the opening of the bypass, It closed last year.)

The large antique store, known for its old gas station signs, will not be part of the project and will remain.  Many travelers also remember the old Shuttle Burger, built around the same time as Astroburger. It was taken down years to build the Burger King.