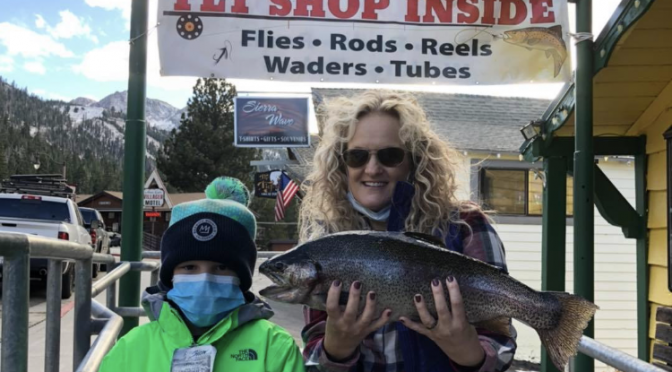 The June Lake Loop and Convict Lake produced the final fatties of the 2020 Eastern Sierra Fishing Season. It was beautiful weather on Saturday and Sunday, November 14 & 15 – 55 degrees at Silver Lake and 70 degrees at Convict.

The Woodhall Family from Highland, CA were fishing at Gull Lake from the park shoreline, when son Aven caught a whopper rainbow – 6.24#. Dad and Aven disappeared, looking for a place to weigh it, when mom Megan’s pole hit while she was attending to their two-month old baby. A lady in the park came running to assist landing the 5.63 pounder.

Both fish will be sent to the taxidermy, as dad said he had been fishing the Loop since he was a kid, and never caught a fish that big.

Convict Lake ended their one-month long Ambush at the Lake Derby with the close of the season. In the final week, numerous 5 – 9-pounders were pulled out, including two at 9# on Sunday., the final day. Derby winners  of the $6,000 in cash and resort prizes, will be announced once all are notified by November 18.