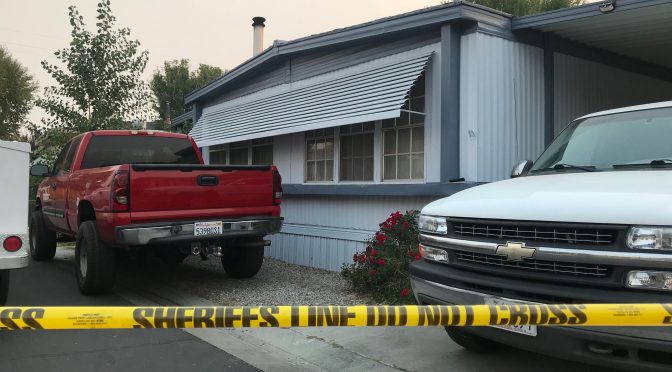 Due to the volatile situation and potential for the suspect to fire additional shots, the surrounding residents in the 1500 block of Matlick Lane were evacuated.
The mobile home is inside the Glenwood Mobile Estates in west Bishop.
The suspect refused to comply and barricaded himself inside the residence, firing  multiple rounds at deputies. A crisis negotiation team was initiated to attempt to persuade the suspect to surrender.
When efforts failed, the Inyo/Mono Special Enforcement Detail (SED) team deployed CS gas into the residence.
The suspect came outside but was non-compliant. The on-site members of SWAT hit the suspect several times with a beanbag gun, but again retreated inside at which point he armed himself with two additional rifles.
Further negotiations were attempted and more gas was used. At approximately 6:40 a.m. the suspect came outside and the Inyo County Sheriff’s Office canine was deployed.
Dustin Flesia, a 45-year old Bishop resident, was taken into custody. Flesia was transported to Northern Inyo Hospital for treatment. No deputies were hurt or injured.
Assisting agencies included Bishop Police Department, Mono County Sheriff’s Office, CA Department of Fish and Wildlife, Bishop Fire, and Symons Ambulance Service.
– – – – –

Original KIBS/KBOV posted report gathered from our listeners . . . Early Monday morning, around 2:00 a.m., reports of shots being fired in the 1500 block of Matlick Lane inside the Glenwood Mobile  Estate  in west Bishop, became an active shooter incident for several hours.

Around 6:30 a.m. the suspect was reportedly  taken down by the Inyo County Sheriff’s SWAT unit, using rubber bullets. He was transported to Northern Inyo Hospital.

10 residential units were evacuated  during the shootings, with three unable to return into the active crime scene as of 8:00 a.m. today.

Check back for further updates from the Inyo County Sheriff’s Dept.