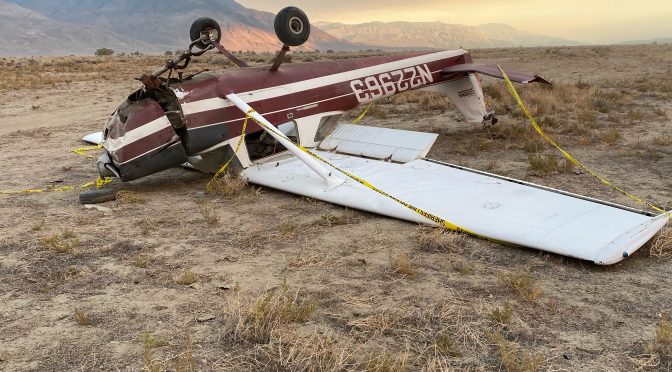 Over the weekend, a small private plane fell about one mile short of the southern approach to runway 3 – 5 at the Eastern Sierra Regional Airport in Bishop over the weekend.

The single pilot, Jeff Thompson, of Bishop,  walked away from the crash on LADWP open land. He walked to the airport, where his car was parked. He drove home and contacted the FAA . Thompson, realizing how lucky he was to survive the crash, heard a rumor yesterday at the airport that he had a heart attack. “The only result was a scratched knuckle,” Thompson told KIBS/KBOV News.

Thompson said the plane’s engine just stopped running short of the runway. “I found a nice flat spot,” he said.

An investigator from the National Transportation Safety Board was reportedly on site Monday, October 12, according to Bishop Volunteer Fire Chief Joe Dell.

The Cessna 150, built in 1968, is owned by David Bartlett out of Reno , NV.  He had loaned the plan to Thompson several months ago.

A representative from the NTSB said the cause of the accident is still under investigation.

(Photo by two teenaged dirt bikers who offered to go out into the boonies for KIBS/KBOV – thanks guys!)