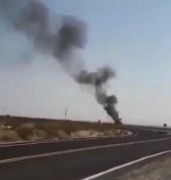 The crash site area is closed by BLM as the investigation continues. Highways 14 and 178 were reopened by CHP late Tuesday.

Around 12:30 p.m. Tuesday, October 20, an F/A- 18E  fighter jet out of Lemoore Naval Air Station crashed near Highway 14 at the intersection of Highway 178, near Inyokern. The pilot ejected and was taken to a local hospital for examination.

Lemoore NAS acknowledged on social media the jet was on a routine training flight over Superior Valley, south of China Lake Naval Weapons Station in Ridgecrest.

Firefighters from China Lake NAWS  responded as well as local authorities. CHP has both highways blocked as the investigation continues.

Today’s crash is the second such area crash of a F/A-18E  in just over a year. A $66 million fighter jet crashed on maneuvers flying through Star Wars Canyon in Death Valley on July 31, 2019, killing the pilot and injuring seven bystanders on the ground.