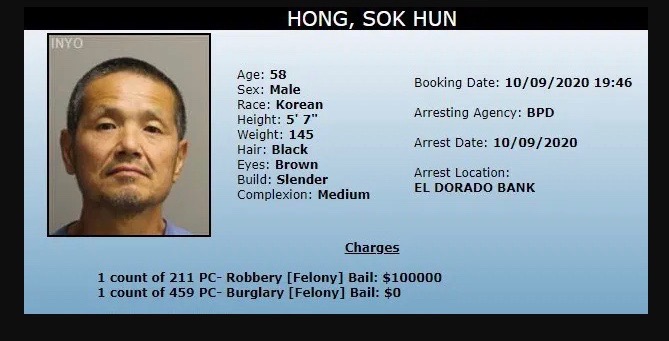 We reported on Monday October 12 of the late Friday attempted robbery of El Dorado Savings Bank at 515 N. Main Street in Bishop. Here’s an update:

Bishop Police Chief Ted Stec reports the suspect did not have a weapon, but did pass a note to a teller. The suspect stood in the lobby after speaking with the teller. Upon arrival, law enforcement took about 10 minutes to evacuate the employees  from inside the bank, out a rear door. There were no customers inside at the time.
Upon entering the bank, the suspect was arrested without incident. He appeared unaware that the employees had been evacuated.
The suspect is under arrest in the  Inyo County jail, and has not posted his $100,000 bail as of October 13. Apparently the suspect had pre-planned his stop in Bishop to rob a bank.
The suspect was reported as missing in San Bernardino County several months ago. We’ve reached out to sheriff’s officials in that county to find a possible backstory of his disappearance, which may have led him to Bishop.
Although bank robbery is a federal crime, and the FBI was notified by Bishop PD, the agency has reportedly not responded.  Several attempts for KIBS/KBOV News to reach the FBI’s Sacramento office have been unsuccessful.