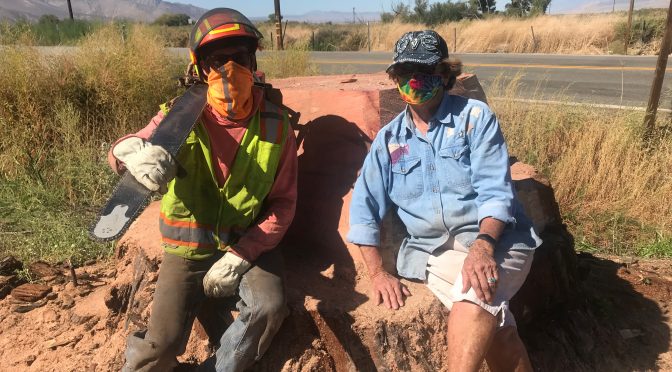 Planted on July 23, 1913, the Roosevelt Tree in Big Pine came down yesterday, September 28. The tree lost its water source, a roadside creek, in the 2017-18 drought. The Big Pine Civic Club tried everything they could to save the 107-year-old Giant Sequoia, including enlisting tree experts from the University of California.

The tree was planted by the then Big Pine Improvement Club in honor of former President Teddy Roosevelt, who had been out of office for four years, but was well respected for his conservation efforts while in office. The recognition occurred to celebrate the opening of the Westguard Pass to vehicular traffic, which is now State Highway 168 heading east into Death Valley.

Known as the big pine in the town of Big Pine, the tree will be completely re-purposed. The mulch from the cuttings will be placed around new plantings at the Highway 395 rest stop and veteran’s memorial on the north end of town. Wood from the magnetic tree will be used by the Catholic church to build a 13-foot cross and possibly a bell tower. Locals will use the limbs to make Christmas ornaments to raise money for the club.

Sandy Lund, from the Big Pine Civic Club said there will be new trees planted – three exactly, to match the three flag poles of memorial – a Cedar pine, a Bristlecone pine, and the Paiute Tribe will be donating a Pinion pine.