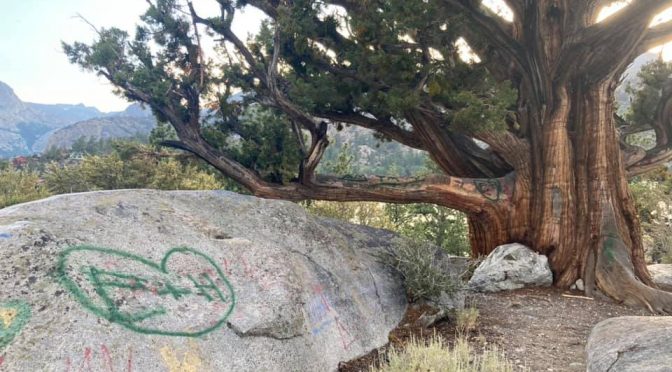 Campgrounds, public lands, and public facilities have never been busier than they are right now in the Eastern Sierra. The large increase in visitation to towns and areas in the Inyo National Forest is likely because visitors from Southern California and other areas of the state and country have been encouraged to stay at home due to the COVID-19 pandemic, and are looking for a getaway in the Sierra Nevada Mountains.

Inyo National Forest Public Affairs Specialist, Deb Schweizer, says she cannot remember a time that she has seen campgrounds and hiking trails busier. “I have never seen our public lands busier,” Schweizer said. “I have never seen as much violation of rules as we are seeing right now such as illegal campfires, dispersed fires, trash dumping, and vandalism.”

One such example of the disregard some individuals are showing is near June Lake. Trees and rocks have been vandalized with graffiti on hiking trails, trashcans have been left overflowing with waste, and playgrounds have been riddled with trash.

At this point in time, they are not completely sure if the vandalism occurred this past weekend or beforehand. Luckily the substation is not currently used by the department, so nothing of value was taken.

Another recent example of some of the disregard travelers are showing on public lands is at the Crestview Rest Area just north of Mammoth Lakes. One picture posted on Facebook shows four dumpsters filled to the brim with trash along with litter spewed across the parking lot.