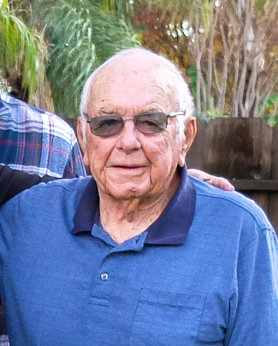 Harry Van De Stroet, our beloved husband, father, grandfather, brother and friend closed his eyes for the last time on June 26, 2020 and opened them at the gates of Heaven in the presence of the Lord. In his incredible 90 years of life, he had seen and done many great things, though he will be remembered him for the small things… daily coffee breaks at McDonald’s, long drives in the beautiful, wild of Inyo County, Owens Valley and the Eastern Sierras, a good drink and a long conversation, a $20 bill slipped into a back pocket during a hug, and the occasional off-color joke or story.

Harry was born in Rotterdamn, Holand to Wilma and Joe Van De Stroet on April 27, 1930. The oldest of 6 children (4 sisters and 1 brother), Harry was often quiet about his early days in Holland and some of the turmoil they endured during World War 2, though he carried the burden for much of his life. When Harry was just 19, he and family came to America in 1949 via ship and settled in Inwood, Iowa in search of hope and prosperity.

Harry was a proud veteran of the United States Army, serving in the Korean War with the 58th Engineering Treadway/Float Bridge Company, as a driver. After the war, Harry and his wife Jozena settled back in Iowa where they had a small farm and welcomed their 2 children, Kathleen and Roger.

They relocated to Artesia, CA in 1962 and later moved to Norwalk, CA. After a number of years in Southern California working for Kraft Foods, the Van De Stroets retired to Bishop in 1992, calling Highland Mobile Home Park their home for almost 30 years. The “man on MacGregor” has finally gone home, though his white windmill will keep turning in the wind. He will be greatly missed.

In his honor, we ask that you savor the good things in life. Family. A good meal. Fishing in the beauty of this wonderful place. A long drive to clear your head. Laughter with those you love. Tomorrow is not promised.

Harry was preceded in death by his mother and father Joe and Wilma Van De Stroet; his sisters, Carol Getting and Alice Leusink; and son Roger Van De Stroet.