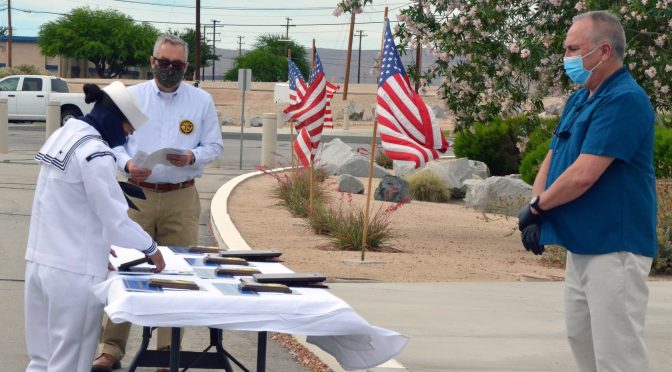 CHINA LAKE, Calif. — The Indian Wells Valley Council of the Navy League of the United States recognized two Sailors from Naval Air Weapons Station China Lake during the 48th Annual Blue Jacket of the Year Awards Ceremony on May 30.

Jacuinde was recognized for several areas of excellence, including her pivotal leadership and exceptional community involvement.

Williams was recognized for her dynamic and trusted leadership, as well as her diligent willingness to always lead by example.

The awards were presented during a slightly modified ceremony this year, due to social distancing implementations prompted by COVID-19. The awards, normally presented during a Navy League dinner, were made available to the awardees during a ceremony held on the front lawn of Building 1 onboard the installation. During this presentation, Williams, Jacuinde and the other nominees were applauded for their superior personal performance and for being outstanding representatives of the Navy and Marine Corps.

“Regardless of any past or future accolades, these young Americans are most importantly outstanding representatives of our nations Marine Corps and Navy,” said retired Navy Capt. Mark Storch, president of the Navy League’s Indian Wells Valley Council. “They are what makes our Navy and Marine Corps so successful, what keeps our nation and the world’s sea lanes so safe.”

In his recommendation to the Navy League, NAWS Commanding Officer Capt. Paul Dale commended Williams for her leadership, drive, and as a role model for others.

“Petty Officer Williams’ importance to the division, department, and command cannot be overstated. She epitomizes what a strong and dedicated First Class Petty Officer should be while challenging her Sailors to follow. Her efforts as a leader within the command have far surpassed her peers, and her success is visible in the accomplishments and accolades of her subordinates,” said Dale. “Her consistent demonstration of loyalty, leadership, decisiveness and exceptional drive are traits associated with the best the Navy has to offer. Her commitment to the Navy and upholding of our Core Values has marked her as one of the finest First Class Petty Officers I have had to the opportunity to lead.”

In his recommendation to the Navy League, Dale commended Jacuinde for her professionalism and leadership.

“Petty Officer Jacuinde is a consummate professional, who in the last 12 months has demonstrated persistent excellence on behalf of NAWS China Lake. Her consistently superior professional acumen and impressive leadership in operational situations resulted in her nomination as the 2020 Indian Wells Valley Junior Sailor of the Year,” said Dale.

The Indian Wells Valley Blue Jacket of the Year Award recognizes the outstanding Sailors and Marines who serve at China Lake. It is a means to increase morale by public recognition and raise awareness in Ridgecrest of the outstanding active duty personnel who serve on base. Nominees must not only display the highest caliber of professionalism in their technical specialties, but also excel in other areas such as peer and community involvement. The Navy League presents the Blue Jacket of the Year Award, Senior Category and Junior Category, annually to local service members.

The NAWS China Lake mission is to support the Navy’s research, testing and evaluation missions providing cutting-edge weapons systems to the warfighter.