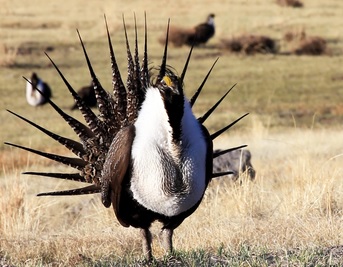 The U.S. Fish and Wildlife Service (“USFWS”) announced it is withdrawing a 2013 proposed rule to list the Bi-State sage-grouse as threatened under the Endangered Species Act.

USFWS made this decision after an “extended and comprehensive analysis of the best available science.” They concluded that local conservation actions have and will continue to successfully reduce threats to the Bi-State sage-grouse.

This is good news for all the Eastside conservation professionals and community members who have unified to form what’s called the Bi-State Local Area Working Group (“LAWG”), a group of diverse stakeholders dedicated to bringing the power of local land protection to care for the Bi-State sage-grouse. The LAWG is made up of state and local officials, public and tribal land managers, ranchers, private landowners, scientists, and conservationists like the Bishop-based nonprofit organization Eastern Sierra Land Trust. Sometimes, like in the cases of the Red-Cockaded Woodpecker or the California Condor, the Endangered Species Act serves as a very effective tool for the recovery of a species. In the case of the Bi-State sage-grouse, our uniquely local and collaborative approach is working without the need for the Endangered Species Act. The committed Bi-State partners have seen success in the targeted and specific actions they’ve taken to enhance our local sagebrush ecosystem. They’ve cared for the needs of our local environment using individualized and flexible efforts.

The efforts of LAWG have not only worked, but are also being heralded across the nation as an exceptionally successful model for local, collaborative, science-based conservation. And after such a comprehensive analysis by the USFWS, we can rest assured that we’re on the right track to protecting the many unique species that make their homes in the sagebrush, like sage-grouse.

Bi-State sage-grouse are a unique population of Greater sage-grouse that live in the Eastern Sierra and western Nevada. The birds are known for the males’ flamboyant springtime mating displays on traditional dancing grounds, known as leks. This species is a key indicator species for the health of other wildlife and for sagebrush areas generally. This means that if the Bi-State sage-grouse are thriving, there’s a higher likelihood that other species of plants and animals are thriving too.

In addition to the Bi-State sage-grouse, mule deer, pronghorn, songbirds, lizards, pygmy rabbits, and more depend on wide sagebrush areas for homes and food. It’s great to have some hopeful news right now, as our world navigates the current COVID-19 pandemic. Once it is safe to do so, local organizations like Eastern Sierra Land Trust look forward to inviting community members back onto the land

to work side by side with them and agency partners to care for sagebrush ecosystems. Future sage-grouse workdays are planned for this autumn, and the safe participation and support of our community members make a positive difference for our iconic Eastern Sierra land and wildlife.