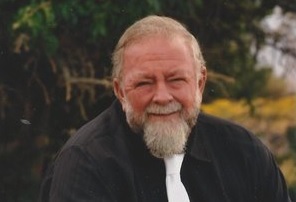 Kenneth (Ken) Paul Thomas was born on April 20, 1954, in San Bernardino, CA, to Oliver and Yvonne Thomas, and went home to permanent glory with Jesus on April 2, 2020.

Ken came to Bishop in the 1980s. He had never hunted deer before and learned “from a book”. He loved the area so much, he decided to stay. One of his favorite places to live was in Round Valley where he and older sons Eric and Michael lived in “peace and nature”. Ken often showed the picture he took of a mountain lion found in their tree! Ken worked as the Manager for the, then, Sportsman’s Chevron. Ken also worked at CSK (Kragen)/O’Reilly as the Store Manager.

Ken loved and adored his family. Ken raised older sons Eric and Michael in Bishop, both of whom graduated from BUHS. Ken and son-to-be wife Gina met at the, then, Sportsman Chevron in Bishop. Ken and Gina’s first date was at the CHP’s Christmas party at Convict Lake, which soon followed by a marriage proposal. Ken and Gina (Huerta) were married on August 9, 1997, in Bishop, CA. On May 12, 2000, they were blessed with son Hunter Kenneth. On August 11, 2017, Ken and Gina renewed their vows with family Ron and Candy Sargent officiating which included youngest son Hunter, as Best Man. Ken enjoyed being a BUHS “Football” Dad. You could find him at the field for home games (sometimes in the snack shack or bringing food for Team dinners) and at all away-games. Ken could be found attending every school event, supporting his sons. He was a dad very much proud of his sons’ accomplishments!

Ken was an avid mule deer hunter – hunting in the Eastern Sierras and in his beloved Craig, Colorado, where he, older sons Eric and Michael, and great friends, set up ‘hunting camp’. He would often tell the stories of when he and friends’ “mustaches froze”. In 2019, Ken took son Hunter, mule deer hunting in the Eastern Sierras – where Hunter had a successful hunt. Ken was so proud to show Hunter his hunting skills. Ken and best friend Bob Stone (who often hunted with Ken in Colorado and who married Ken and Gina) started the Easter Sierra Chapter of the Mule Deer Foundation – something he was very proud of because of the good it did for the habitat. Ken was an avid fisherman (attended “Fishmas” for many years); loved driving the pontoon boat; and being outdoors. Anything ‘nature’ made him smile. Ken loved the ocean (especially Santa Barbara, Pismo Beach, LaJolla & Hawaii); boating on Lake Tahoe and Yellowstone. Ken loved the smell of fresh trees he would cut each Christmas for his family – and enjoyed the pine nuts! Ken was a dedicated Denver Broncos fan – seen in his MANY Denver Broncos fan items (man cave covered in them). Ken took his older sons Eric and Michael to Denver Bronco games. In 2017, Ken enjoyed a behind-the-scenes tour of Mile High Stadium in Denver, CO, with Gina and Hunter. He loved Estes Park, CO! Ken enjoyed NASCAR and was a major Earnhardt fan. You could always find Ken at local events; Mule Days (where he and older sons Eric and Michael were Committee members); at the Tri-County Fair; various parades; Cardinal Village Pizza Night; 4th of July events; and many more. Ken enjoyed going to NAAM (highlight was meeting Nita Strauss of Alice Cooper’s band); and to Alice Cooper and Journey concerts. Any place he could go to “rock on”.

Ken was a great worshipper of Jesus and played electric guitar on several local church worship teams. You would often see him raising his hands, praising Jesus. One of his greatest gifts Ken had was the ability, as a member of worship teams, to usher in the presence of Jesus. Ken was a member of the local Christian band “What Iff?” and enjoyed playing with them at the Eastern Sierra Music Festivals. Ken also enjoyed playing at the “Battle of the Bands”. Whenever Ken could play – he would!

Ken’s heart was always for the children. The year he took 40 stuffed teddy bears to the children’s hospital in Reno, NV, meant the world to him. He would love to sit and talk to the kids, pray with the kids, sing with the kids– always with a father’s heart. Ken loved to make people laugh. Ken’s sense of humor was like no other – and those that worked with him and/or knew him KNEW his sense of humor! He loved playing practical jokes on co-workers and customers!

It’s hard to put in words this larger-than-life, gentle man was. His greatest joy was his sons and grandchildren. He was such a hands-on dad. We will miss him dearly, but we rest in knowing we will be reunited. Ken awaits his family in Heaven: wife Gina Marie Thomas; sons Eric Paul Thomas of Redlands; Michael Lee Thomas (wife Khaleedah and grandchildren Cora and Kai) of Ft. Collins, CO; and Hunter Kenneth Thomas of Bishop; Brothers Larry (wife Sharon) and Steve (wife Kathy); many nieces and nephews; many in-law family members; and great friends, ALL whom he loved and adored. Ken never met a stranger. If you knew him, he became your friend. Ken had a special fondness for sister-in-law Danni Delgado who he could count on for support. Ken rested knowing Danni would be there to support her sister and nephew when needed. We are forever grateful for the blessing you have been, and are, to us!

Ken was put on this earth to worship Jesus and do work in His name, loving well. Ken gave his life to Jesus and exemplified the Father’s heart. Ken LOVED WELL!

Ken’s family would like to thank Brune Mortuary for their compassion, support; generous blessings and for bringing Ken home to us. We will never forget how wonderful you were to us! We would also like to thank our family and the many great friends who called, sent texts, sent cards and brought food – even in the difficulty of this unprecedented time. We’d like to thank our great friends and Pastors Ron & Candy Sargent; Mike and Heather Gehringer for helping us through this difficult time. To everyone who loved Ken, your love and support will NEVER be forgotten! The biggest legacy Ken leaves behind is that we all see the world through the eyes of the heart of Jesus, as he did.

A Celebration of Life for Ken will be announced and held in fall, 2020, Ken’s favorite time of year.