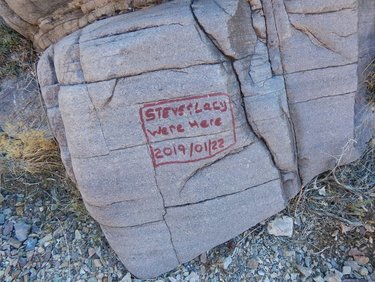 DEATH VALLEY, CA – A man has confessed to marking multiple sites in Death Valley National Park with graffiti. Charges are pending. Graffiti that included “Steve & Lacy” was found on rocks, a well, and historic structures in Echo Canyon, Butte Valley, Homestake Dry Camp, and Crankshaft Junction. Defacing any part of the national park degrades the experience of other visitors.

Park rangers had some leads pointing to the man’s identity, and appealed to the public for more information on April 14. The National Park Service (NPS) appreciates that many people shared the story on social media and contacted the NPS with tips. The NPS Investigative Services Branch (ISB) handles tips on cases in all national parks and other NPS sites. The tip line can be reached at: 888‐653‐0009, online at www.nps.gov/ISB, or by email at nps_isb@nps.gov.

The man who confessed said that his acquaintance saw the story on social media and brought his attention to it. “Steve,” a resident of British Columbia, called the tip line himself on April 17. The following day he spoke with the investigating park ranger, confessed, and apologized.

Lacy is blameless – she is a dog.

Charges have not been filed again the man yet. Penalties could include a fine and/or restitution charges. The man’s cooperative attitude will likely be a mitigating factor.

The National Park Service cares for special places saved by the American people so that all may experience our heritage.

This graffiti happened in January 2019 and January 2020. Park rangers are still patrolling Death Valley National Park during the current temporary closure due to coronavirus. Through traffic is allowed on CA‐190 and Daylight Pass Road from Beatty.