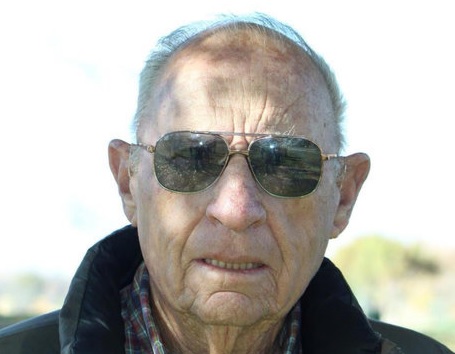 Jim was a devoted son, husband, father, and grandfather who never missed the opportunity to share his wisdom and knowledge with anyone who asked. His grandchildren, especially, were blessed with many years of stories and discussions about the secrets to life, living, and loving. Jim had a mischievous sense of humor, strong sense of duty, a firm handshake and a green thumb, and took pride in both his work and his large family. He was known for his honesty, integrity, ingenuity, loyalty, and generosity, and was a much-respected member of the Eastern Sierra business community.

Jim grew up in Los Angeles during the Great Depression. He left home at age 17 and eventually went to work the nightshift at Lockheed Martin, dividing his daylight hours between college, the beach, and playing for semi-pro baseball teams in the L.A. area. He later volunteered for active duty in the military and was given the choice of going to flight training in either Las Cruces, N.M. or Lone Pine, CA, both of which were entirely unfamiliar to him. As fate would have it, Jim chose Lone Pine and on December 1, 1942 he was dropped off at midnight at the bus stop, where he looked up and saw a sign that said “Ellis Motors.” Less than 20 years later, he would own it.

It was in Lone Pine where Jim met the love of his life, Juanita Ruiz, a beautiful young woman working as a soda jerk at the pharmacy. On July 22, 1944, they were married in a very small ceremony in Kinston, N.C. Their love would endure many trials and tribulations, and they were only separated after 72 years when Juanita passed away in 2016. The couple renewed their vows four times – on their 25-, 50-, 60-, and 70-year anniversaries.

Not long after they married, Jim was shipped off to the Pacific Theater. Flying the Corsair, with Marine Fighter Squadron VMF251, he participated in the invasions of the Admiralty Islands, Philippine Islands, and Okinawa, earning the Distinguished Flying Cross for his service.

Jim returned to the States in 1945, meeting his then-six month old daughter, Nita Marie, for the first time. In 1947, they relocated from Las Vegas to Pine Creek, where Jim secured work at the Vanadium Mine. The couple’s first son, James, was born not long after. Three years later they were back in Lone Pine and welcoming their third child, Robert.

Jim went to work for Howard Miller at Miller Chevrolet before being recalled to the service in 1952 for the Korean War, which required relocating the family to Santa Ana. When a career opportunity presented itself in Lone Pine in 1955, Jim retired from the Marine Corps at the rank of Captain in order to move his family home. He went to work for Ellis Motors and its owner, Howard Ellis. With help from business owners in Lone Pine and a lot of long hours, Jim was able to put together the money to partner with Howard’s widow in 1960 and to buy her out in 1961.

Throughout his career and well into retirement, Jim’s love for community and desire to help others manifested itself through service. He was past President of the Lone Pine Lions Club, past President of the Bishop Rotary Club, past Auto Club Advisor for Inyo-Mono counties, past Vice President of the Bishop Chamber of Commerce, former City of Bishop Mayor and Mayor Pro-tem while serving on the Bishop City Council; a member of Inyo Associates, the Bishop City Planning Commission (twice), Bishop Elks Lodge, Knights of Columbus, and Lone Pine VFW and American Legion; served on the Inyo County Board of Education; and conceived of the idea for the Foundation for Excellence.

In addition to community service, Jim enjoyed flying his plane all over the Eastern Sierra and state of California for both business and pleasure; spending many hours in his woodshop creating treasures large (hutches and baby cradles) and small (jewelry boxes and coin banks) for his family and friends; traveling with Juanita; gardening; and golfing. At one point, he launched a “secret shopper” business to assist business owners with customer service issues and challenges. A devout Catholic, Jim also attended daily masses at Our Lady of Perpetual Help Church for as long as his health allowed.

Jim will be missed immensely, but the family knows how blessed they were to have had him in their lives for as long as they did, and takes comfort in knowing he is at peace and with his beloved Juanita back in his arms.

He has also now reunited with his brothers- and sisters-in-law Pete and Pauline Aigner, Al and Vina Aigner, Carl Ruiz, Vernon “Ollie” Olson, and Gracie and Bud Miller; and son-in-law, Sonny Lindsey.

A funeral mass, with full graveside military honors, will be held later this year, when conditions permit.

“There is more than one way to solve a problem. It’s like going around a mountain: either side will get you there.”  – James Irving Ellis