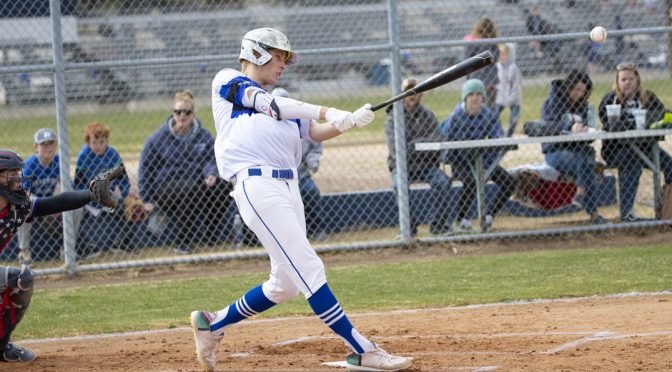 Just like so many times last year, the first inning for Bishop was fantastic. Steve Omohundro’s team scored eight runs. Lone Pine Pitcher, Kris Nelson started the inning out walking a few batters. The senior was missing his pitches high early in the inning. Bishop quickly took advantage of the walks, driving in multiple runs. Nelson didn’t receive much help from his defense in the bottom of the first. In total, Lone Pine committed five errors on plays that should have been routine in just one inning. The Eagle outfielders were having trouble fielding fly balls, which would have gotten Mike Button’s team out of trouble before it was too late. Ace Selters, who started the game for Bishop on the mound, pitched just two innings. It was quite apparent that Selters is poised to have a breakout year in his Junior campaign. The pitcher struck out five batters in two innings of work. Billy Mckinze took over pitching duties in the third inning, and had quite an impressive showcase. The lefty threw for two innings, giving up just two hits, and striking out three batters. Going in to the bottom of the fourth inning, Bishop were up 9-0 against the Eagles. Manager, Steve Omohundro put in some of the reserves to give them some game experience. One of the standout hitters was Andrew Steedle, who did not register any hits going in to Tuesday’s game. Steedle saw a pitch from Nelson and ripped it into left field, driving in two runs, and giving Bishop an 11-0 lead. Jake Frigerio closed out the game for Bishop, and struck out one batter in the fifth inning to ensure the game did not go the distance. From a batting perspective, one thing is very clear: Braeden Gillem is now a power hitter. Last year, Gillem got on base mostly through ways of finesse. He did a nice job of getting walked or putting the ball into gaps between the infielders last season. However, if Tuesday’s game is anything to judge Gillem’s season on, he will have a good chance to hit a few balls out of the park. During two of his at bats, the Junior drove the ball deep into the outfield. Bishop get High Desert League play started next week against a tough Rosamond opponent, who are considered to be one of the favorites to win the league.