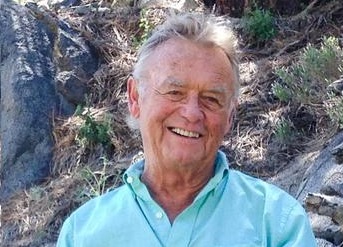 Bil [with one “l”] lived his life to the fullest. He was a born leader and consummate teacher who never took “no” for an answer and always had a project going. Bil lost his battle with cancer on March 19th at his home in Bishop.

Born William Francis Askin to Jerome and Margaret on January 4th, 1945 in Brooklyn, he was the fourth of five children.  He grew up in NY and upon completion of high school, joined the Marines in 1966 as a reconnaissance scout- serving in Vietnam, Cuba and the Arctic.

After leaving the Marines, he moved to Manhattan Beach and worked for Los Angeles County in several capacities.  He was a Lifeguard on the sunny beaches of Southern California and a Probation Officer in the County camp system and later a Producer of educational videos.  Whilst still working for LA County, he moved to Mammoth Lakes in 1978, where he was known as “Buckle Bil” for the buckle business he developed which created several Mule Days buckles for Bishop.  He did construction and had his own specialty advertising business.

He moved south to Bishop in 2000 when he married his wife, Jane. They purchased property in Bishop which Bil, with his incredibly creative vision, completely renovated and redesigned. His passions included travel, fishing, camping, golf, sailing and cigars.

Bil was a generous, big-hearted guy with limitless talents and a roguish sense of humor.  He faced his numerous health challenges with positivity, creativity and an indefatigable spirit, never letting them hold him back, supported by talented doctors, caregivers and friends.

He is survived by his wife Jane, son Tycho and dog Boomer, and his siblings, Sister Peggy, Jerry, John and Bob. He was so loved, and will be sorely missed. A celebration of life will be organized at a later date.