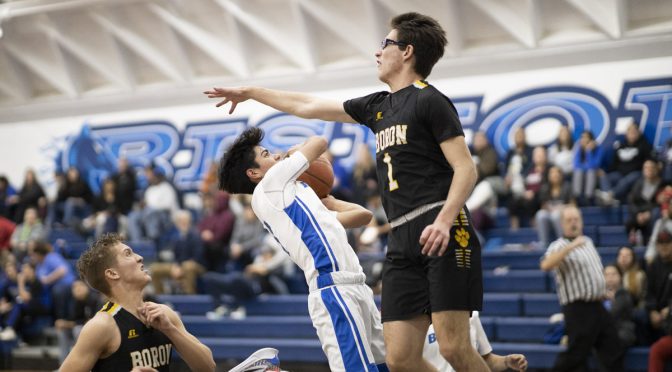 The Bishop Broncos suffered their second straight loss last night against the Desert Scorpions losing 62-45. Unfortunately for Bishop, the loss all but eliminates them from having a chance to win the High Desert League.

Bishop got out to an early lead, hitting their first few shots. However, the advantage did not last for long. Desert took control of the game in the second quarter and never looked back.

When Elliot wasn’t hitting shots beyond the arc, he was driving inside the paint whenever he pleased. There were many times throughout the game where Elliot had the ball on the left wing and would slash into the paint to create an easy layup for himself.

Another player who was hitting shots throughout the game was Marquis Morris. The Desert guard was the recipient of quite a few wide-open looks from three thanks to Elliott’s penetration which collapsed the defense.

The Broncos did a good job on Desert’s best player in the first half. Emil Rogers, who is averaging a double-double, was a non-factor inside thanks to Luke McClean and Tristan Valle’s interior defense. The Scorpions would often throw the ball inside to Rogers to try an get easy looks. However, every time he got the ball inside, McClean and Valle were there to stave off the big fella’s efforts.

Although Bishop did not have the best game, there were still some positives. Luke McClean, who had a bad night from beyond the arc was able to make up for it on the defensive side of the ball. There was a span where McClean had three straight steals on three possessions. A few plays later, McClean had two blocks in one sequence.

Jaydan Braithwaite had a good game defensively as well. The senior was a pesky presence with his excellent perimeter defense. He won player of the game honors thanks to his hustle.

Clay Omohundro performed well in the game. The young Junior came off of a rough game against Rosamond on Tuesday in which he had difficulty connecting on his shots. This time, Omohundro hit jumpers and did a nice job creating baskets for himself off of the dribble.

Bishop will face California City on Tuesday for their next game in the High Desert League.