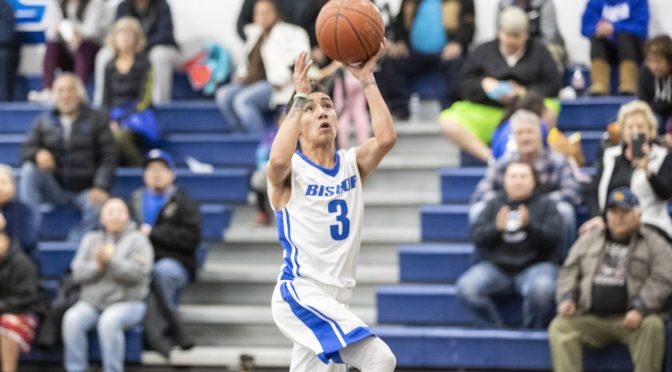 Last night was a heart breaker. In a must win game against Bishop’s bitter rival, Kern Valley, Robert Chavez’s team came up short.

The timeout didn’t help too much, as the Broncos added to their lead until it reached double-digits.

Throughout the first quarter and midway into the second, Bishop dominated the game. Both Kenyan Piper and Clay Omohundro were hot from deep, combining for four three pointers in the first half.

However, the fun didn’t last long for Bishop. Coach Christianson’s team rallied back to cut the deficit.

With about four minutes to go in the second quarter, Kern Valley trailed by eleven. A combination of Shelton Alley, Davin Lee, and Kaden Preston fought back to tie the ball game up right before halftime.

Bishop went into the third quarter and held onto the lead for a couple of minutes. The game turned into a back and fourth affair until the start of the fourth quarter.

Kern Valley blew the game open in the final portion of the game. Three pointers rained down on the Broncos defense, and the team was unable to cope with the onslaught. Kaden Preston, Shelton Alley, and Ryan Walker were sinking nearly every shot the three of them put up.

Clay Omohundro received player of the game honors for his excellent shooting. The Junior has really made strides this past month of the season, especially when it comes to creating his own shot.

Jaydan Braithwaite also had a good game against Kern Valley. The senior knocked down two three point shots, and swished a couple of mid-range jumpers as well.