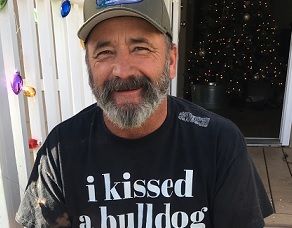 Steve McWithey of Chalfant Valley passed away at home with his wife Julie and his loyal canine companion Rue Be Doo by his side on Friday, December 27, 2019 at the age of 55. Steve was born on March 7, 1964 and grew up in the Owens Valley. He graduated from Bishop Union High school.

After High school Steve worked in the roofing business and after learning the trade he obtained his contractors license and owned his own roofing company. Later, he took his roofing and general maintenance experience and was employed at High Country Lumber. He would eventually finish his career at Caltrans.

Steve enjoyed reading, fishing, golfing, camping and anything to do with science and astronomy- some family adventures were planned around eclipses. He was happiest when spending time with his children and his wife Julie-his sweetheart since grade school.

Steve packed a lot of life into the short years he was on this earth. His humor and kindness impacted all who met him. You couldn’t have a bad day if you spent time with him. He would find a way to make you laugh. Steve was always available to help anyone in need. He was a volunteer engineer on the Chalfant Valley Fire Department and loved being a part of the community.

His father Ben McWithey, his mother Paula Mcwithey and his brother Jim McWithey preceded him in death. He leaves behind his wife Julie McWithey, his two children Haley (Darin) Harding and Chase McWithey, His best friend Ray Hailey who was like a brother to him, his sister Louella (Hugh) Erfurth, his Stepmom Dawn (Bruce) Vidal, his uncle Glen McWithey and Aunt Judy Whitman, nieces Heather Peltier and Sarah (Justin) Campbell his cousins Cherie (Skip) Clark, and Sean McWithey and many other nieces, nephews, and cousins.

A Celebration of Steve’s Life will at 11:00am on Saturday January 18th at the Chalfant Valley Fire Department. Come and share stories with family and friends.