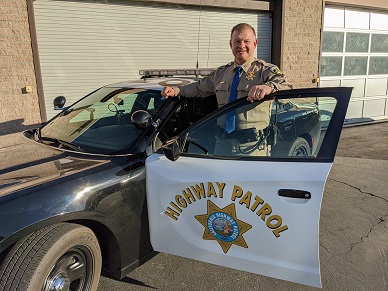 On January 2, 2020, the California Highway Patrol Bishop Area welcomed Captain Terry Lowther as the new Area Commander.  Former Captain Javier Dominguez retired at the the end of 2019 after a 30 year career with the Department.  Captain Lowther is a 23 year veteran of the CHP.  He was born to a military family and raised in San Diego, CA.  He started his career with the CHP in the San Diego Area where he patrolled area freeways for ten years.  He promoted to Field Sergeant where he worked the South Lake Tahoe area for six years before transferring to the Office of Assistant Commissioner at CHP Headquarters in Sacramento, CA.  Captain Lowther promoted to the rank of Lieutenant and took on his first command position at the Donner Pass Commercial Vehicle Enforcement Facility in Truckee, CA, where he worked for two and a half years.  He then became Commander of the South Lake Tahoe CHP Office for approximately two and a half years before promoting to the rank of Captain and moving to Bishop,CA.

The Bishop Area is proud to serve the Eastern Sierra region providing safety, service, and security to thousands of residents, commuters, and tourists each day.  As part of the CHP’s Inland Division, our office patrols the CHP’s largest geographical area (approximately 12,000 square miles) in the state.  It consists of nearly all of Inyo County, including Death Valley National Park, and the southern portion of Mono County, extending North 10 miles on US 395 to Tom’s Place and North on US 6 to the Nevada State Line.