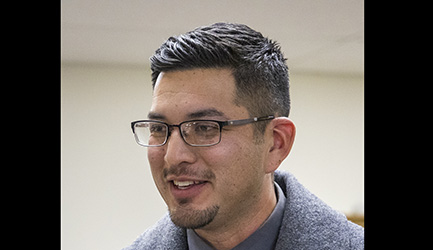 Topah Spoonhunter, the Director of the Bishop Paiute Development Corporation, has earned appointment to the Northern Inyo Healthcare District Board of Directors, representing the residents of southeast Bishop, Wilkerson, Big Pine, and Aberdeen.

Spoonhunter took the oath of office during the Jan. 15 NIHD Board of Directors meeting. Chosen from among several applicants, he fills the board vacancy left by the December departure of veteran Director MC Hubbard.

A resident of Big Pine, Spoonhunter will serve NIHD’s Zone V through this November. At that time, he will have the opportunity to stand for election to complete the remaining two years of Hubbard’s term. If he chooses to do so and wins, Spoonhunter will serve until November 2022. At that time, he may then run for election to a full four-year term on the Healthcare District’s Board.

“I am humbled and honored to have the opportunity to be a part of something as important as the Northern Inyo Healthcare District,” Spoonhunter said. “I know the NIHD Board and NIHD staff have already done some great things and are on their way to doing even more, so I just hope that my knowledge and experience will be able to help in some way.”

Spoonhunter brings a wide array of experience in business, government, and social workings to the NIHD Board. “It is because of these experiences that I have seen governments, organizations,
and communities on various levels and through different lenses,” Spoonhunter said. “I have seen the challenges that we face, but I have also seen the opportunities to make a difference.”

An enrolled member of the Northern Arapaho Tribe, Spoonhunter was born in Bishop and raised on the Big Pine Paiute Reservation. He attended Big Pine Elementary School then Bishop Union High School. With earned Associate degrees in Math/Science and Liberal Arts, he attended Haskell University of Lawrence, Kansas, receiving a Bachelor of Arts degree in Business Administration in 2006.

As the Director of the Bishop Paiute Development Corporation, Spoonhunter manages the tribal corporation’s business properties, including the buildings leased by the U.S. Forest Service and the
California Department of Motor Vehicles. He also oversees BPDC’s commercial office space as well as its mini storage and RV storage facilities. His responsibilities include project and budget management.

Spoonhunter’s professional experiences also include working for local and tribal governments; experiences that he feels are an invaluable asset to him. He has worked for both the Big Pine
Paiute Tribe as well as the Bishop Paiute Tribe. He has worked with youth programs, education programs, schools and school districts, Indian Child Welfare Act (ICWA), tribal TANF, government
administration, grant management, suicide prevention, quality assurance, project management, and economic development.

He served as the Privacy Officer for Inyo County while working as an Administrative Analyst for Inyo County’s Health and Human Services Department. In that role, his duties included policy development as well as ensuring the County’s compliance with both federal and state laws, and investigating and reporting breaches concerning health information.

“I’ve always felt that we have a responsibility to make the world a better place, and I will do my best to improve things in any way that I can,” he said.

Spoonhunter is the son of Alan and Linda Spoonhunter and father to daughter Faye and son Max.