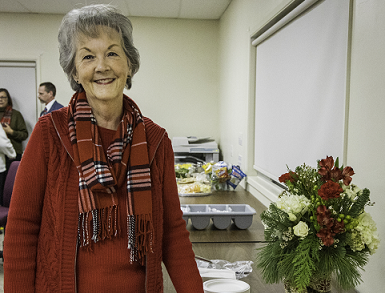 As 2020 nears, Northern Inyo Healthcare District is bidding a fond farewell to its current longest serving Board of Trustees member, MC Hubbard. After almost 14 years, Hubbard is retiring from her service to the residents of the Healthcare District’s Zone 5 region, covering southeast Bishop, Wilkerson, Big Pine, and Aberdeen.

NIHD’s Board of Trustees is in the process of accepting letters of interest from Zone 5 residents interested in being appointed to Hubbard’s position. The Board selected Trustees Robert Sharp and Jody Veenker to conduct interviews of candidates and then make a recommendation to the entire Board for final selection. That person will hold the Zone 5 seat until November 2020. At that point, he or she will need to formally run for election to complete the remaining two years of Hubbard’s term, slated to end in 2022.

NIHD Chief Executive Officer Kevin S. Flanigan, MD MBA, said to date, five people expressed an interest in the position. Of those five, at least two have submitted formal letters of interest to the Board.

For Hubbard, the decision to retire, as she likes to call it, from the NIHD Board is one that she has considered for a while. “Although I have learned a lot about healthcare and have certainly appreciated the time I have served, I have been on the board for more than 13 years,” Hubbard explains. “I decided it was time to allow someone else to serve on this essential Board of Directors.

Appointed to the Board in 2006, she had just retired from a long-term banking career. She says the chance to learn more about the inner workings of healthcare intrigued her. Hubbard quickly realized the size of the learning curve ahead of her, especially as NIHD began its move to construct a new two-story hospital.

The completion of the two-story hospital in 2013 serves as a milestone for all the Board members of the era, and Hubbard is no exception. Following voter approval of a needed bond measure, the Board stood alongside NIHD staff as they faced construction challenges and rigorous state seismic regulations. Hubbard said there were days where she wondered what she had gotten herself into with her appointment. She would go on to win election to her position three times.

“I admit there have been some wonderful accomplishments over the years, but the first thing that comes to mind is the completion of the hospital building,” she smiles. “It was quite an experience going from the construction phase to the final occupancy over the three-year process.”

As for a personal sense of accomplishment, Hubbard notes the Healthcare District is still considered a continually growing entity. “Healthcare is in an endless state of change, and I’m not sure everyone realizes how much change occurs every year. Plus, how much of that change is out of our control at the local level,” she said.

“Being part of the District during both the positive times and the challenging times, I think that where the real accomplishment rests, not just for the Trustees, but for everyone who works at the District. Every day in healthcare gives us another chance to make a difference in the lives of those we serve. We have to enjoy the good times and survive the bad to continue making that difference. If we lose sight of that, then we lose sight of those we serve.”

As for her fellow trustees, Hubbard wishes them well on their journey. “The other four board members are very caring, and certainly a group with diversified backgrounds. I am sure they will rise to the challenges facing healthcare districts going forward,” she said. “Each individual brings their strengths to the Board, and I am confident they will achieve positive things.”

As for her future, Hubbard intends to spend more time with her family, including her four great grandchildren. She will also stay busy as a trustee to the Slager Foundation and as a member of Bishop Sunrise Rotary.

Hubbard notes that through the years, she received a lot of support. “Thinking back, all I can say is what a ride it has been. I want to thank our community members and certainly the wonderful staff at NIHD,” she said. “It’s truly been a pleasure to work with all of them.”