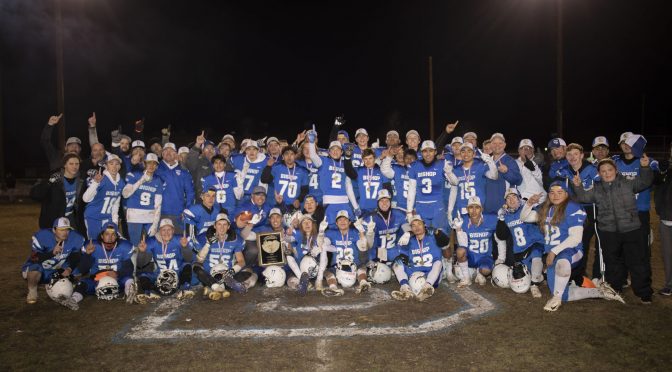 Defense wins championships. However cliché it sounds, the Bishop Bronco’s defense is what won them the championship against the Orosi Cardinals on Saturday night. Midway through the first quarter, the Broncos forced their first turnover of the game, when Jaydan Braithwaite stole Orosi Quarterback, Evan Lara’s screen pass, which was intended for star running back, Dominic Martinez inside the red zone. Braithwaite knew the ball was going to be thrown to Martinez before Lara could even react. Later on, Orosi had another opportunity to score inside the red zone. Lara tried to throw a ball off of his back foot. The wayward throw was intercepted in the middle of the field by Darren Dondero, who recorded his fourth interception of the season. Right before halftime, it appeared as though Orosi would score some much needed points trailing 13-0. Dominic Martinez received the hand off, shifted to the left and headed toward the goal line. That’s when a host of Bronco defenders stormed toward Martinez, who was on the one yard line and fumbled before scoring. The ball looked like it had a mind of its own, inexplicably shooting out of the hands of the junior tailback toward the touchdown marker as defenders closed in on Martinez. The officials determined the Orosi Cardinal did not cross the goal line, therefore the Broncos would take possession on their 20 yard line. Later on in the game, Lara would fumble the ball for the team’s fourth turnover on the night near midfield.

Turnovers weren’t the only facet of the game in which Ricky Beal’s defense thrived. Sophomore, Kennedy Bachelder led the team with ten tackles and two sacks. Cornerback, Joe Weaver had five pass breakups along with two tackles, and Tristan Valle recorded seven tackles and one sack. Although Bishop’s defense is it’s strength, the Broncos offense isn’t too shabby either. Led by Luke McClean and Steven Paco, James Ferrell’s offense has scored fifty-five total touchdowns this season. Five of those touchdowns were scored in the championship. Going into the second quarter, the game was tied 0-0. Steven Paco turned the tide in favor of Bishop with a one yard scamper into the end zone, making it 7-0. The first score of the game was Paco’s 14th rushing touchdown of the year. Later on in the second quarter, Luke McClean found Johnny Torres, affectionately known now as “Johnny Playoffs” for his stellar performances in the post season for a twenty yard reception, which put the Broncos at the one yard line. McClean finished off the drive with a one yard rushing touchdown. With 10:30 to go in the third quarter, McClean hooked up with the player of the game, Joe Weaver for a twenty yard touchdown pass over the middle. Bishop converted the two-point attempt to give them a three score lead against Orosi. Luke McClean would get his second touchdown of the game when he kept the ball for a three yard touchdown right before the fourth quarter began. The rush was the star quarterback’s eighteenth touchdown on the ground this season. Bishop’s offense would finish off the night with a twenty yard sweep to “Johnny Playoffs.” Torres went in motion from the right side, took the ball up the left, and blew past the Cardinal defenders. The game would finish 34-7. The CIF title is the first for Head Coach, Arnie Palu and the third in school history. The team’s last championship came in 2010. Before that, Bishop had to wait fifty-three years to see a title, which happened in 1957.