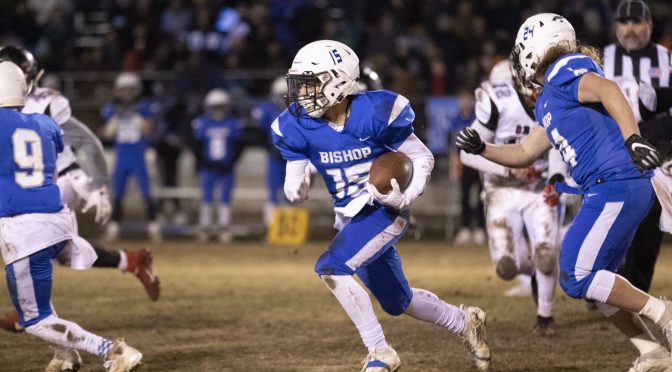 The ride was fun while it lasted. In the final game of the season, Bishop ended up losing 37-19 to the CIF Northern Coast Division 7 Champion Selesian Pride. The loss is the first for the Broncos since the third game of the season against Rim of the World.

One thing was quite apparent while watching the 6-A California State Championship on Saturday. Salesian were fast and strong. They were perhaps fastest and strongest team Bishop had faced all season. Speaking of that speed, it was on display during the Pride’s first drive. Quarterback, Ronald Robertson efficiently marched his team all the way down to the one yard line. That’s when Salesian’s strength was demonstrated. Bishop did a solid job of stopping the first two Salesian attempts in the red zone. However, the third time was the charm as Salesian scored off of a 1 yard sweep to Running Back, Kareem Sullivan.

Later on in the first quarter, Bishop responded with a touchdown of their own. Quarterback, Luke McClean marched his offense all the way inside Salesian’s five yard-line. McClean called his own number and scored on a keeper. The PAT was missed by Dan Sudki. The Broncos trailed 7-6.

Midway into the second quarter, Salesian added to their lead. The Pride were running an overload offense the entire drive leading up to the score. That’s when the team from Richmond decided to throw the ball in a traditionally run-based formation. Robertson found standout wide-out, Kailan Chang over the middle of the field for a 30 yard touchdown. Bishop trailed 14-6.

Shortly after the touchdown, Salesian got the ball back and marched deep into Bronco territory. It appeared as though the Pride were going to score again; that’s when Kennedy Bachelder came up with a huge interception. Robertson, who was facing pressure threw it right to the young sophomore. The ball was spotted at the 2 yard-line.

Unfortunately for Bishop, the momentum from the turnover was short lived. That speed and power mentioned earlier was on display, when UC Davis commit, Princeton Toki tackled McClean for a safety. Bishop would go into the half trailing 16-6. The 22 points given up by the third quarter were the most points Bishop had surrendered since the game against Rim of the World in mid September.

Instead of folding, the Broncos demonstrated that resilience, which has served them so well throughout the entirety of the year. Running back, Steven Paco got Bishop within nine points when he scored off of a 15 yard sweep. Paco, who grew up playing as a slot receiver but switched to running back his sophomore year got the ball from the slot for the touchdown. Salesian scored yet again in the fourth quarter to put the game out of reach. Robertson hooked up with Chang for the third time on the day. The Pride converted the two point try, which made the score 30-13.

Luke McClean scored a few moments later off of another quarterback keeper, but it was a little bit too late for Bishop pull off a comeback.

Bishop finish their season with a 12-3 record, which is the best year Arnie Palu has had as a coach. The team finished as the CIF Central Section Champions for Division 6. Bishop will miss key contributors such as Luke McClean, Tristan Valle, Jaydan Braithwaite, and Joey Molina next year. However, the cupboard is not empty. Returning players include Kennedy Bachelder, Steven Paco, Joe Weaver, Clay Omohundro and Trevin Moose.