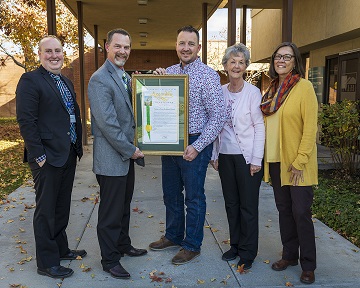 Earlier this year, NIHD began a MAT program with grant and other funding, which the District runs in collaboration with other stakeholders for coordination of care. During the preceding three years, the District and others began to review opioid use. They identified a trend in the escalation of overdoses, deaths, criminal cases, and medical issues associated with opioid use, misuse, and abuse. NIHD applied for and was one of 31 named recipients for the Bridge Grant. This action allowed for the creation of the MAT program, which is now expanding into other areas of Behavioral Health treatment. Since the implementation of the program:

NIHD has seen more than 92 enrolled patients in eleven months.

 More than a half dozen patients have been treated with the life-saving medication, Narcan, by police, first responders, or private citizens outside of the hospital.

State Health officials have also asked the program’s coordinators to share their path of success and growing expertise with other healthcare agencies in hopes of launching similar programs in other areas of California.

Senator Borgeas’ certificate noted that the District’s MAT program has “broken barriers to treat patients dealing with behavioral health issues and is improving their quality of life.” It goes on to commend the entire NIHD staff for the program’s “creative efforts (that) will truly save lives.”

Assemblyman Mathis’ resolution, read into the Assembly’s official record on Nov. 14, made note of the “vital and interdependent” relationship between communities and their nonprofit health care organizations, the resulting positive health outcomes, and “the spirit of ongoing community engagement” fostered through charitable activities.

Mathis’ resolution goes on to note that in keeping with the District’s vision, “NIHD has stood firm to its core value of compassion and integrity; aspirational values of quality, excellence, and innovation, and permissive values of safety and team-based partnerships with its professional staff.” Mathis then went on to congratulate the District as ACHD’s Healthcare District of the Year and commended the Board of Trustees, leadership, and staff for continually providing outstanding healthcare services to the residents of Northern Inyo County.