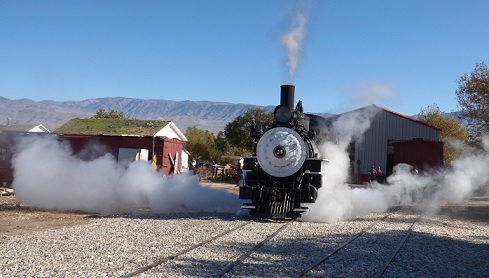 About 200 people came out to celebrate the return of the Slim Princess Locomotive #18 to the Eastern California Museum in Independence.

Visitors from throughout the region and all across Inyo County enjoyed the day-long Welcome Home Party for #18 on Nov. 2. The day started early when the all-volunteer crew from the non-profit Carson and Colorado Railway fired up historic, narrow gauge steam engine. Dozens of people watched the start-up process and enjoyed photographing the handsome locomotive as it traveled up and down the short stretch of track on the Museum grounds. A steady stream of train enthusiasts, including plenty of families, then got an “up close and personal” view of how the vintage, 1911 steam locomotive operates by taking a “cab ride.” The volunteer train engineers and brakemen explained the complex controls and answered questions during the rides Carson and Colorado President Dave Mull was also on hand to answer questions about the nearly 20 year effort to get the locomotive running after its career with the Southern Pacific Railway traveling from Laws to Keeler. In the 1950s the engine was retired and donated to Inyo County and placed in Dehy Park in Independence before being brought back to life by the CCRW group.

The Slim Princess recently came back to its Independence home after a nearly year-long “visit” with the Durango & Silverton Narrow Gauge Railroad. Randy Babcock, the Chief Mechanical Officer of the Durango Silverton Narrow Gauge Railroad, and Vice President of the CCCRW, presented a slide show and talk on the engine’s time in Durango. Babcock also signed copies of his recently completed book, “SP Narrow Gauge 18 Steams Anew.” The book relates SP #18 was taken apart and then put her back together with clear, concise writing and more than 100 photos and maps. The Friends of the Eastern California Museum sponsored a silent auction featuring dozens of books and other merchandise related to the history of the Eastern Sierra. The Friends also hosted the afternoon tri-tip dinner on the Museum grounds, with Dugan Whistler’s mouth-watering tri-tip beef and beans. Students from the Owens Valley School helped serve the meal, and the crowd was entertained by the Black and White String Band, featuring local musicians Nina Weisman on mandolin and Howie Schwartz on guitar, playing bluegrass and “old time music.”

The Slim Princess is “home” in the Larry Peckham Engine House at the Eastern California Museum,  at 155 N. Grant St., just three blocks west of the Historic Inyo County Courthouse in Independence. For more information call 760-878-0258. For more about the Carson & Colorado Railway group, see carsoncolorado.com.