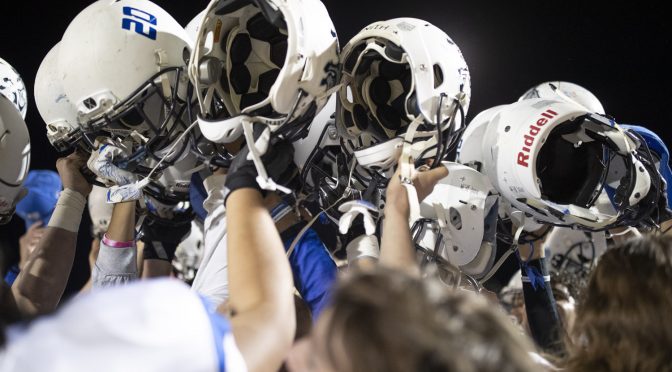 It wasn’t easy, but the Bishop Broncos got revenge on the California City Ravens. The game was a rematch of last year’s High Desert Championship which finished 28-14 in favor of the Ravens. Big plays were rampant in that game, however, this year that was not the case. Both teams found themselves in a defensive slug-fest with just seven measly points scored between the two highest scoring teams in the league. Although there may not have been much that happened offensively, that does not mean it wasn’t an entertaining game. Neither team was giving an inch defensively, with the opening first down coming late in the first quarter. Just like last year, Cal City dared the Broncos to throw the ball. Stacking the box proved to be effective against Bishop early on. Standout running back, Steven Paco along with quarterback, Luke McClean discovered that there were no lanes to run through. Midway into the second quarter, the deadlock was broken after Cal City had to punt from deep in their own territory. The kick was a poor one, which went high in the sky, but just ten yards. The Broncos took over at the Ravens twenty-five yard line. After having good starting position, Bishop were still having trouble moving the ball. Things got even worse for Arnie Palu’s team, when a penalty moved the chains back to put them twenty yards away from the sticks. However, McClean proved to the Ravens that he could throw the ball when he threw a 25 yards pass on the near sideline to Junior wide receiver, Joe Weaver who snagged the fifty-fifty pass out of the air to get Bishop inside the five. Two plays later McClean punched it in for the three yard score, which made it 7-0 after the Dan Sudki . Going into the second half, Bishop relied heavily on their stout defense to win the game. Defensive coordinator, Rick Beall had his side prepared for anything the Ravens had to offer. The Ravens offense amassed just sixty-nine yards of total offense. California City quarterback, Jeremiah Neal who came into the game with ten passing touchdowns and 1,270 yards threw for negative-six yards on the day. Defensively, the Broncos finished with one sack, fifty-eight tackles, nine tackles for a loss, and one interception. Perhaps the best play the defensive unit made was to end the game, when Neal fired a ball twenty yards down the middle of the field to Marquis Mackenzie. However, the ball did not reach it’s target, as Luke McClean was able to intercept the ball with less than two minutes remaining in the game. With the victory, Palu’s team has clinched the number one overall seed for the CIF Central Section Division Six playoffs. Bishop will be squaring off against Boron for the second time this year in the first round of playoffs on Friday.