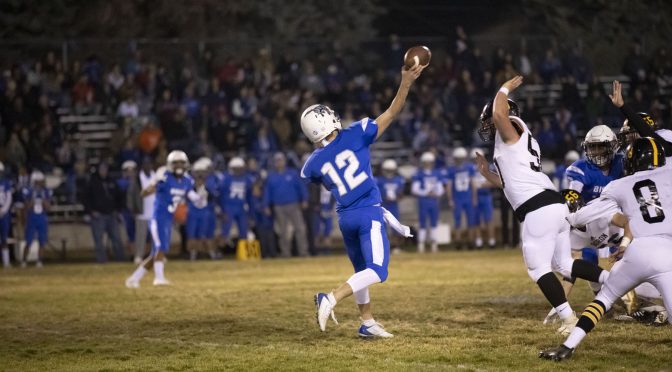 The Broncos advanced to the second round of the CIF Central Section Division Six playoffs Friday, beating Boron 13-0. This was not the same game that took place just three weeks ago in which the High Desert League Champions won 56-6. Boron were better prepared for Bishop this time, and did a good job containing the team’s dangerous rushing attack. On Friday, Bishop had 178 total yards rushing with one touchdown, compared to the 307 yards and six touchdowns the Bobcats surrendered back in late October. Nearly two quarters in, the game remained scoreless until Luke McClean punched in a touchdown on a run up the middle inside Boron’s five yard-line with a minute left before the half. The easy score was set up by a beautiful pass from Luke McClean to Steven Paco which was caught for thirty yards and put Bishop deep into enemy territory . Later on in the game, McClean demonstrated his ability to throw yet again, when he found team receiving leader, Joe Weaver on a pass up the middle for fifty-two yards, making it 13-0 in favor of Bishop. The Junior finished the game with three receptions for ninety-five yards and one touchdown. The senior quarterback would finish the night with 180 yards passing and one touchdown. Bishop’s defense had another outstanding performance, shutting out their opponent for the second straight game. Kennedy Bachelder led the unit in tackles with a total of ten along with seven tackle-assists, while the defensive line plugged up Boron’s running lanes. The Bobcats were able to get ninety yards on the ground on thirty-nine attempts. Tristan Valle led the defensive line in tackles with six. Three of his tackles were tackles for a loss.

Up next for Bishop is a match-up against the Foothill Trojans, who are the number eight seed in the playoffs.