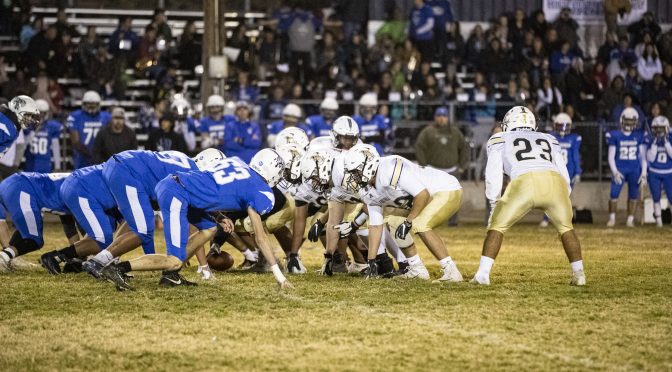 The Bishop Broncos have advanced to the semi finals of the CIF Central Section playoffs after knocking out the eight-seeded Foothill Trojans. Early in the first quarter Junior running back, Steven Paco snapped his two game scoreless skid when he ran in the ball from inside the five yard line. The play was set up by Luke McClean, who passed the ball to Jon Torres for a gain of forty yards. Two plays later, Jaydan Braithwaite tried to score off of a sweep, which Foothill were able to stop after a fourteen yard gain. The prior play set up Paco’s easy touchdown making it 7-0 in favor of Bishop. Foothill quickly answered back thanks to the impressive running of Bryan “Pony” Diaz. The senior ran the ball up the middle three times in a row, putting the Trojans inside Bronco territory. Diaz’s next run was quite impressive. “Pony” took the ball up the middle, then cut outside until he was finally dragged down at the one yard line thanks to a Luke McClean tackle. Foothill’s running back gained thirty yards on the play, setting up a one yard score from Diaz. Late in the first quarter, McClean’s number was called on a direct snap. Bishop’s most dynamic weapon was able to run the ball in from twelve yards away to put Bishop ahead 13-0. Kicker, Dan Sudki was unable to tack on the point. With a minute left in the second quarter, Bishop relied on McClean to get into the endzone yet again. McClean got the ball off of another direct snap and scored easily thanks to some solid blocking up front. Bishop now led the game 20-7 going into halftime.

Perhaps one of the best plays of the game occurred in early in the third quarter. With 9:46 to go in the quarter, Luke McClean was flushed out to his right side. Three defensive lineman were pursuing Bishop’s quarterback. While trying to escape, McClean was able to blow past the defenders and dive past the goal line for the score. The Broncos went up 27-7. Bishop’s lead would be tested with eleven minutes left in the game, when McClean tried to find a receiver on a slant route and threw an interception to Foothill linebacker, Jeff Cuevas. The Trojan returned the ball for a pick-six, which cut into the Broncos lead twenty point lead. The Broncos were then able to ice the game thanks to a Joe Weaver touchdown reception. McClean had three receivers to his left and Weaver to his right. At first, it appeared as though McClean was going to throw to the left side, however, at the last second he looked right and found Weaver, delivering the killing blow. Bishop are now in the semifinals, and will be playing the Lindsay Cardinals on Friday 6:00 pm.