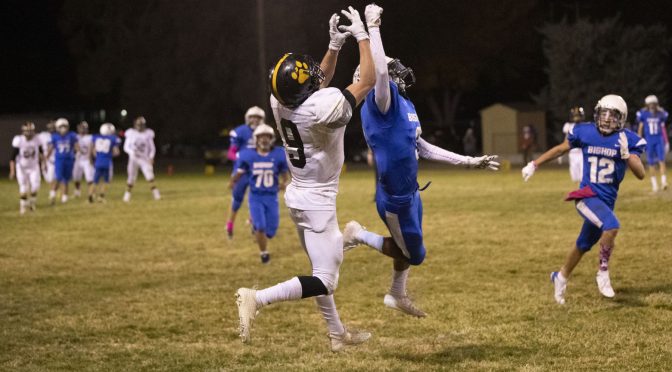 We played a complete game in our homecoming win over Boron. Senior Luke McClean accounted for 6 touchdowns, rushing for 4 scores and throwing 2 touchdown passes. Luke went over 100 yards passing and rushing. Luke was named our offensive player of the game. Steven Paco keyed the rushing attack that rolled up over 300 yards on the night. Paco ran for 125-yards and a touchdown. Joe Weaver caught a touchdown and ran in a score. Defensively Kennedy Batchelder made a team high 9 solo tackles and played great on the offensive line earning the overall player of the game award. Jaydan Braithwaite picked off two passes and made 5 solo tackles including a tackle for a loss. JB was named defensive player of the game. Zach Mojarro came up from the JV team and played great on special teams. Mojarro was named our special teams player of the game. Every Bronco got playing time including the JV players who moved up this week. A big credit to Coach Rich Miears and the JV staff for doing a great job developing their athletes. This week we travel to California City for the High Desert League Championship game. Both teams are 4-0 in HDL play. The winner has the inside track to the #1 seed in the CIF central section division 6 playoffs. After two weeks off, the JV are expected to have a game with California City. Thanks for the coverage and have a great week. Coach Palu