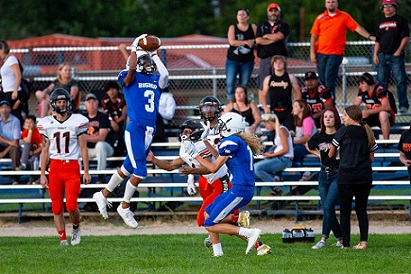 The Bishop Broncos are searching for a victory this Friday after a tough loss against an undefeated Rim of the World team. Arnie Palu’s team will square off against the winless Desert Scorpions for their first game of High Desert League Play.

Bishop have played three straight tough opponents to start out the season, including Fernley, Yerington,and Rim of the World. However, Bishop will be facing a much less formidable team in Desert.

If Las Vegas set a betting line for this one, the Broncos would be heavily favored in this match-up.

According to MaxPreps, the Scorpions are ranked twentieth our of twenty-four teams in Division Six. In the team’s last game, they lost 55-0 against Fillmore, who are the fourth ranked team in CIF Southern Section Division Thirteen football, just one spot behind Bishop’s previous opponent, Rim of the World.

As for Coach Palu’s team, they are the fifth ranked team in division six for the CIF Central Section.

Like always, the team will rely heavily on standout quarterback and safety, Luke McClean. The senior is coming off of a game in which he scored a 56 yard touchdown run. He also led the team in tackling last week, with fifteen total tackles.

Other players of note who the Broncos will need to step up in this game include junior quarterback, Clay Omohundro, and linebacker and running back, Wesley Pettet.

Coach Palu has spoken highly of Omohundro in practice, and has praised his work ethic throughout the summer and this young season. Bronco fans are hoping number ten will have a breakout game this Friday, after posting moderate numbers in the first three games. So far, Omohundro has thrown for 195 yards and 1 touchdown while completing thirty-eight percent of his passes. To be fair, Bishop are not a team that airs it out often.

As for Pettet, he has been fantastic defensively, posting the third most tackles on the team with twenty. On the other side of the ball, Pettet has been sharing carries with Steven Paco and Joey Molina, which has not helped him much in the statistics category. The two-way player has thirteen carries for fifty yards and no touchdowns. Expect Pettet to be a guy the team relies on offensively going forward.