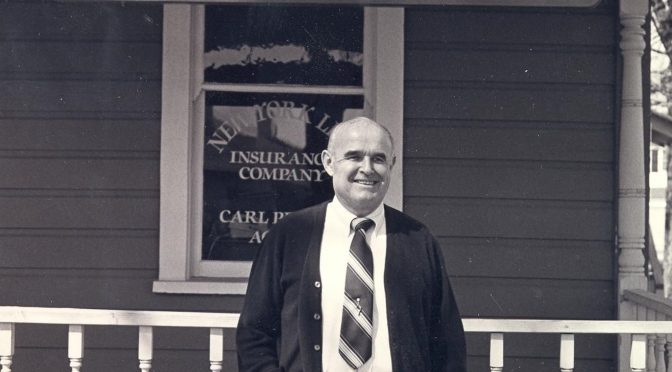 Carl was born in Portland, Oregon on March 15, 1935 and passed away May 15, 2019. He graduated Bishop High school where he was actively involved with the agriculture program and where he excelled in football and basketball. He could consistently sink a basketball from half court and was often called upon in clutch situations to bring the team to a win. He participated in rodeo winning many awards, including the 1952 Bishop Homecoming calf roping contest and the wild cow riding championship at the Cow Palace in San Francisco.

After High School graduation Carl attended a year at Pierce Junior college where he played basketball. He transferred to UC Davis and graduated in 1958. He was in the top of his Reserve Officers Training Corps (ROTC) program class which provided unique opportunities afforded to the best in the military. Carl entered the United States Army in 1958, and completed infantry training, along with Army Ranger, Airborne, and Aviation schools. While in the Army he married Arlene Brierly and they moved to Fort Lewis, Washington where Carl served with the 4th Aviation Division. He flew the tandem rotor H-21, known as the flying banana, and was the first group of Army aviators to transition from piston powered helicopters to turbine helicopters receiving training in the historic Huey Helicopter. He survived 3 helicopter accidents during his flying career. Two of those accidents were significant, and one was a minor accident. He flew helicopters in Alaska as part of the government’s concern over potential invasion by Russia through Alaska. Carl was honorably discharged from the Army as a Captain in 1963 when he returned to Bishop with his family Arlene, Mark, Hugh, and Rob to work for the Brierly Ranch.

Carl worked several years on the Brierly Ranch, farming, irrigating, and working cattle. During that time, he decided to move on to other opportunities and joined New York Life Insurance Company in 1966. He also later went into business with Johnny Morris at the Embers Restaurant. He was an agent with New York Life Insurance Company for 50 years. He achieved many awards with them over the years including President’s Council and Million Dollar Round Table.

Carl was actively involved in the local community through the Rotary Club where he served as President. He coached youth basketball and football, was involved with the Foundation for Excellence, and was in short “a huge part” of the local community. He served as Inyo County Cattlemen’s president and was a California Cattlemen’s Association Director. He gave freely of his time and money to many local causes and people in need.

Carl loved life, he enjoyed entertaining people at his home, dining with friends, and helping people in need. He relished fine dining and a good glass of wine. He loved animals; his Emmy Lou and Rachel were his constant companions.

Carl lived an honorable and good life. He was the epitome of a self-made man. He came from very humble beginnings, worked hard to obtain an education, and built a successful business, raised a family, served his country and community, and was a good friend to many. He will be missed.

Graveside services will be held at the Pioneer (West Line Street) Cemetery, Wednesday May 29, at 11 AM. A reception lunch will follow. The reception location to be announced at the service. The family requests in lieu of flowers donations be made in Carl’s memory to the Laws Railroad Museum (Bishop Museum and Historical Society), P.O. Box 363; Bishop, CA 93514.