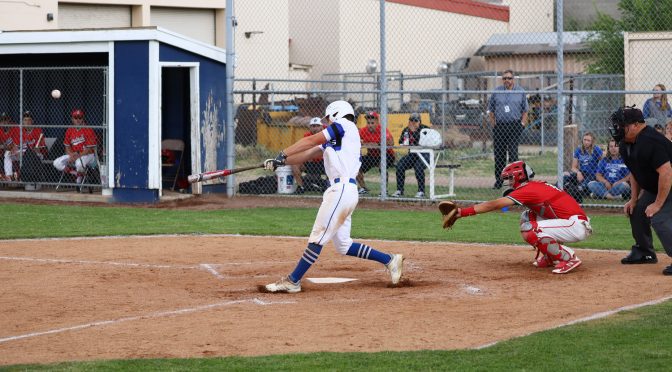 Payback was the meal of the day the Broncos served up to the Lindsay Cardinals in a rematch of last year’s CIF Central Section Division 6 Final on Wednesday. Bishop beat Lindsay 13-3. The team will surely give a big thanks to their star shortstop, Michael Kubiak, who hit a 3 run homer and had 5 total RBI. Things did not start well for Bishop. Ace Selters walked Julio Godoy to start the game, then hit the next batter. With runners on first and second, Ryan Scheufele for a two-RBI double for the Cardinals, which gave them a two run lead in the top of the first inning. However, instead of capitulating, the Broncos responded with a fantastic first inning, scoring four runs. Cardinals starting pitcher, Aaron Macias had a nightmare of a game and lasted just one-third inning before he was pulled after surrendering three runs. Up next was Julio Godoy for Lindsay, who walked a run in, making it 4-2 Bishop. The good times kept rolling for the Bishop, as Michael Kubiak crushed a ball into deep left field for a three run shot to make it 8-3.

Kubiak enthusiastically flexed as he rounded the bases to meet the entire team at home plate. The next time the senior visited the plate, he nearly hit a grand-slam. Lindsay’s left fielder was tracking the ball all the way to the warning track in nearly the same spot Kubiak hit his home run. Luckily for Lindsay, the Bronco’s meal didn’t turn into a feast. Ace Selters finished his day after three innings, and Landon Kruse came in to ensure a Bronco victory. The game ended, and the crowd rose to their feet in applause as they watched the championship-bound Broncos exchange handshakes with the team who stopped them from winning the previous year. Coach Omohundro will hope that his team’s hunger, which has translated to a 10-game winning streak will carry over into the final against Foothill from Bakersfield, CA on Saturday.