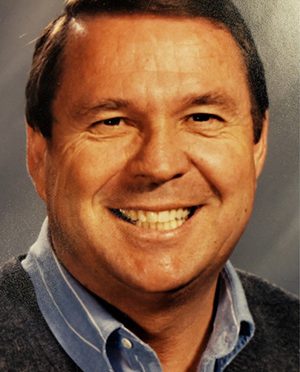 Robert “Bruce” Cook passed away peacefully at home on March 7th, 2019. Bruce was born on October 14, 1935 in Chouteau, Oklahoma and was the second oldest of four children. He was raised in Colton, California and met the love of his life, Nancy (nee Asmus) at UCLA; the two were married in 1958.

Bruce obtained his master’s degree from UCLA in 1961 with a secondary education teaching credential; additionally, he obtained a counseling and administrative credential. He taught in the Anaheim Union High School District for a total of 38 years where he also coached basketball football and track. During the summer months, he worked for the Coca Cola Bottling Company and Pacific Intermountain Express trucking company. He served in the US Army Reserve for over five years.

Bruce and Nancy retired to Bishop, California in September, 1999. Bruce enjoyed being in the outdoors, taking trips into the backcountry and fishing on the Owens river. He was Nancy’s number one fan and a big supporter of her horses. Bruce also enjoyed tracing his family’s European and Cherokee ancestry. Bruce will be missed.

He is preceded in death by his parents Roy and Alma Cook. He is survived by twin sons, Steven and Michael, grandchildren Edward, Yoshiaki, Samantha, Charles, Erika and Rebekah, and great-grandchildren Clark and Yolanda.

Services to be held at Brune Mortuary, Bishop, California at 11:00 am on Friday, March 15th with reception immediately following at Hidden Creeks Ranch. Internment to be determined at a later date. In lieu of flowers, please make donations to ICARE (Inyo County Animal Shelter).