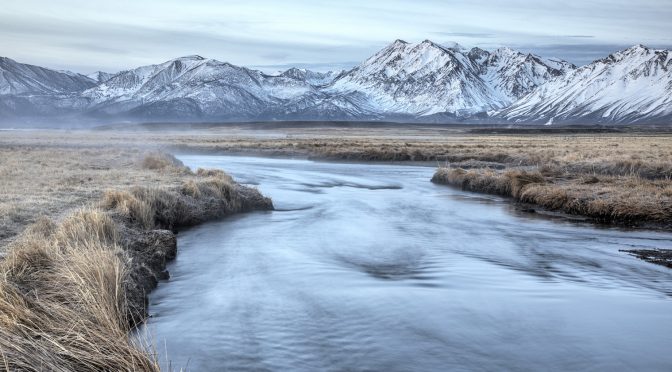 BISHOP, CA – Earlier this evening, the Inyo Mono Alpine Cattlemen’s Association’s Spring Tour Dinner Meeting was held at the Talman Pavillion. The meeting included updates on information relevant to ranching interests at the local, regional, state, and federal levels. Staff members from the Los Angeles Department of Water and Power (LADWP) were in attendance and announced that LADWP plans to spread 30,000 acre-feet of water in Long Valley starting this coming May 2019.

In a statement shared by LADWP staff at the dinner, LADWP Senior Assistant General Manager of Water System Rich Harasick said, “It has been a great year for rain and snowfall in California – after recent storms the Eastern Sierra snowpack is 188% of normal as of March 8th. LADWP continues to work on its operational plans and is preparing for the upcoming spring runoff. Efforts are already underway with water spreading started in Inyo County.”

Consistent with past practices, LADWP plans to provide water to its lessees based on LADWP operational needs. In prior years when the Eastern Sierra runoff exceeded the capacity of the aqueduct system, LADWP spread water to its leased lands in the southern Mono area. This was the case during the 2017 record precipitation, when as much water was spread as the land could handle.

LADWP is evaluating this year’s anticipated runoff while also considering the demands of the overall water system, which include customer needs, environmental commitments and hydroelectric generation. Taking these factors into account, LADWP is committed to maximizing the beneficial use of runoff water to the fullest extent and working with its lessees and ranching community to use water efficiently. In order to keep residents and partners of the Eastern Sierra informed of the steps being taken to manage runoff, LADWP will continue to issue additional updates as conditions and operations progress.