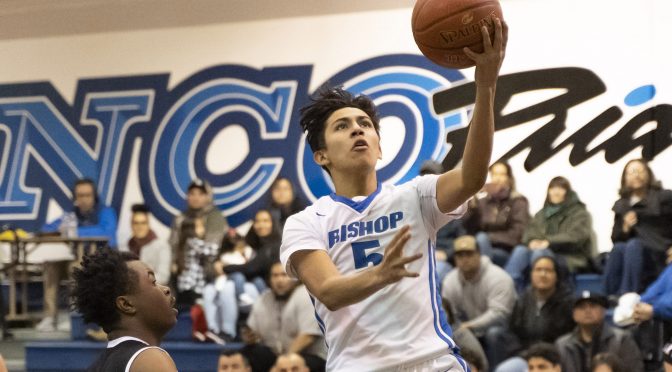 The Bishop Broncos Boys Basketball team have advance to the second round of the CIF Playoffs for Division 5. Bishop beat the Desert Scorpions in their third meeting of the year against the team from Edwards Airforce Base. It was a battle between the second and third placed teams in the High Desert League, with the lower seeded team upsetting the Scorpions 68-62. Bishop’s Boys Team played perhaps their best game of the season last night. The main concepts that Bishop executed well yesterday were passing, movement off the ball, defense, and scoring off of turnovers. One player who epitomized all of those traits in the first round of CIF was Blaine Spoonhunter, who was constantly in motion, active on the defensive end, and set up his teammates for assists during all four quarters.

Perhaps Spoonhunter’s best play of the night came when he turned the ball over on a pass to the left wing, and sprinted back to block a clear-cut layup. After the rejection, the ball was quickly thrown down to the offensive end, and Spoonhunter scored on a layup from the right side. Bishop began to pull away at the beginning of the third quarter, getting their lead up to fourteen at one point. The Broncos were able to capitalize off of some bad Scorpion passes, which led to easy buckets.

The large lead slowly dwindled as the Broncos were scoring two pointers, and the Scorpions were answering with three pointers. About midway through the fourth quarter, Bishop lost the lead, and trailed 56-55. The Broncos lost their lead because of Desert point guard, Jaleel Walker, who hit back to back three pointers. On Walker’s second three point attempt, he had enough focus to drain a three from the right wing while being run off the line by a charging Bronco player. The Junior point guard converted the four point play, and the game was tied up. The Broncos then lost the lead a few plays later, but ended up assuming control of the game late thanks to Cal Omohundro’s clutch free-throws. Bishop will now head to Firebaugh to take on the Eagles in the seocond round of CIF Central Section play. We will have the coverage of this game on 1230 AM KBOV at 7:00 PM Friday night.