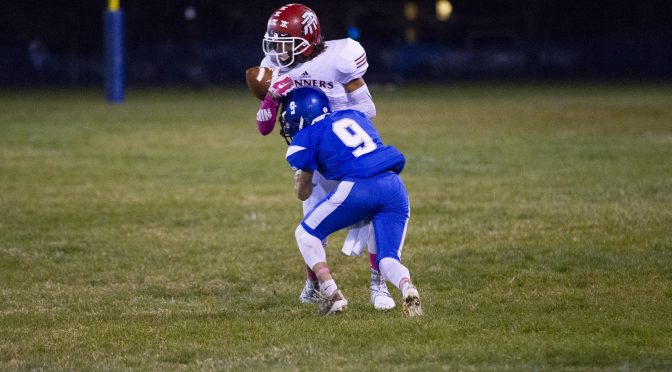 The Broncos continued their winning ways Friday night beating Rosamond 59-24 for their fifth consecutive victory. The five straight victories mark the first time that head coach, Arnie Palu has accomplished such a feat. Although the Broncos ended up winning comfortably, they were not team who got first blood. The Rosamond Roadrunners opened the scoring with a monster run from star running back, Charles Anthony Watson. The senior running back, cut to the outside and broke away from the Bronco secondary for an 80-yard run midway in the first quarter. However, the Broncos soon responded with a one-yard touchdown on a Luke McClean keeper, making it 7-6 thanks to the Christian Morales extra point.

Later, running back, Wesley Pettet punched in a rushing touchdown right on the doorstep, which expanded Bishop’s lead to eight points. A few moments after the score, Christian Morales converted a 20-yard field goal, and the Broncos went up 17-6 Rosamond quarterback, Colby Adams was able to cut the deficit by throwing a strike on the far side to Davion Jackson for a 15-yard touchdown. The junior quarterback’s ability to escape the pocket and find his receiver made it 17-12. The second half was much less competitive, mostly because the Bishop defense were suffocating their opponent with back to back scoop and scores. Mark Mayhugh was able to score his second defensive touchdown in three weeks, when a fumble was forced inside the Rosamond five-yard line, Mayhugh was there to collect the ball for the touchdown. Bishop’s biggest run of the night came from Steven Paco, who used his vision and speed to blow by defenders for a 55-yard run. Paco’s touchdown made it 45-12 late in the third quarter.

Palu’s team ended up expanding their commanding lead, and the game ended 59-24, with Rosamond scoring a few garbage-time points in the fourth quarter. The Broncos are on the road against Boron next week, with an opportunity to inch closer to a High Desert League title.