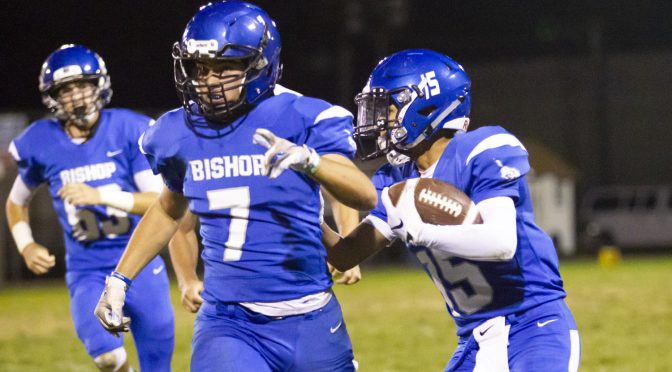 Bishop CA– The Bishop Broncos football team impressed mightily against Sierra, winning 61-0 for their largest margin of victory this season. In the first half, Broncos quarterback, Luke McClean was the standout player. McClean hooked up with receiver, Jayden Braithwaite for a touchdown on the team’s second possession. On the next drive, the Junior quarterback was able to score by bursting up field though multiple Chieftain defenders for a 30 yard rushing touchdown to make it 14-0 in favor of Bishop. McClean ended up finishing his night with 125 total yard and two touchdowns. The team’s ground attack was headed by Steven Paco, who had 127 yards on 12 carries, as well as 3 touchdowns. Head coach, Arnie Palu said that Paco had a “breakout performance” and was impressed with the way the young ball-carrier handled a sizable workload. Defensively, the Broncos looked just as good as they did on the other side of the ball. Bishop were able to get into the backfield regularly, disrupting the team’s timing of the Sierra offense. The great defensive line play helped Mark Mayhugh wreak havoc in the secondary. Mayhugh had 4 interceptions, returning one of them to the house for a 30 yard pick-six. The Broncos improved to 4-2 in the regular season, and are on a three game winning streak, which is the first time Bishop Union have been able to accomplish such a feat under Arnie Palu. League play begins next Friday at Kern Valley next week. Kickoff is set for 7:00 PM.