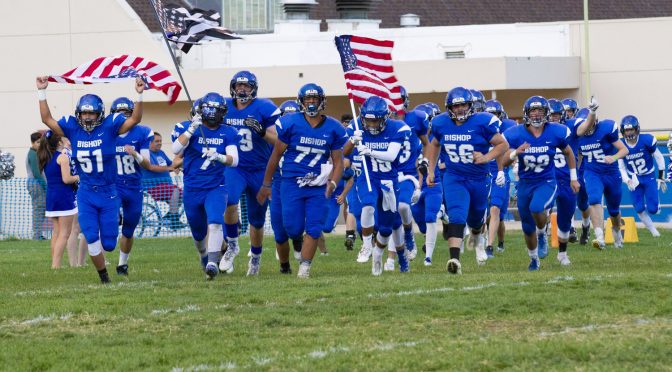 The Bishop Bronco Varsity Football Team lit up the scoreboard on Friday as the played host to the Whitttier Christian Heralds. The Broncos didn’t waste anytime getting on the scoreboard as Jayden Braithwait would rush it from 46 yards on, on the Broncos first play of the game. The Point After by Christian Morales was good and the Broncos had the early lead 7-0 with 9:14 left in the first quarter.

Then on their next possession, Clay Omohundro would connect with Luke Mclean from 26 yards out the Broncos would add another six. The PAT was good and the Broncos increased their early lead 14-0. With the first quarter at 2:53, MCClean would connect with Manny Talavera, on a five yard pass, on Talavera would rush it in from about 40 yards out and the Bronco scoring continued. Morales would make good on the PAT and the Broncos would increase their lead to 21-0. Keeping the first quarter scoring going, Luke McClean would rush in from 23 yards to add to the Bronco lead. Morales would continue with his good PAT’s and at the end of the first qaurter the Broncos led 28-0. In the second quarter, the Heralds were finally able to get on the scoreboard thanks to a 35 yard field goal to make the score 28-3. With just under two minutes remaining in the second quarter, Mclean would hand off Jayden Braithwait would rush to the end zone from 43 yards out. That set up Morales for another point after attempt. With a low snap, Morales picked up the ball and was able to make it to the get to the end zone, untouched for a two point conversion. Going to the third quarter, with 11:08 remaining, McClean would rush it in on a quarterback keeper to score another Bronco touchdown. Again, Morales would make good on the point after and the score was 43-3. With 6:30 left in the third, Morales would add another three on a field goal from 23 yards out and the Broncos lead was 46-3.

Finally, with 5:49 remaining in the game, Omohundro would find Mark Mayhugh from 11 yards out to add another six points. Morales would add the final point for the Broncos on a good Point after and the Broncos went on to route the Whittier Christian Heralds 53-9. Clay Omohundro passed for 79 yards and Luke McClean connected for 62 yards. On the ground, the Broncos were led by McClean who rushed for 95 yards, Jayden Braithwait added 46 and Clay Omohundro 21. Through the air, the Broncos were led by Jayden Braithwait who caught for 46 yards and Mark Mayhugh caught for 42. Defensively, Manny Talavera had 7 tackles, Ian Murphy 6 and Darren Dondero, Jon Torres and Hunter Beal each added 5. The Broncos will hit the road this Friday to Ridgecrest to take on the Burroughs Burros. We will have the Varsity game for you on 1230AM, KBOV, with Rock Baker calling all the action. Pre-game aire time 6:50 and kick is set for 7pm.