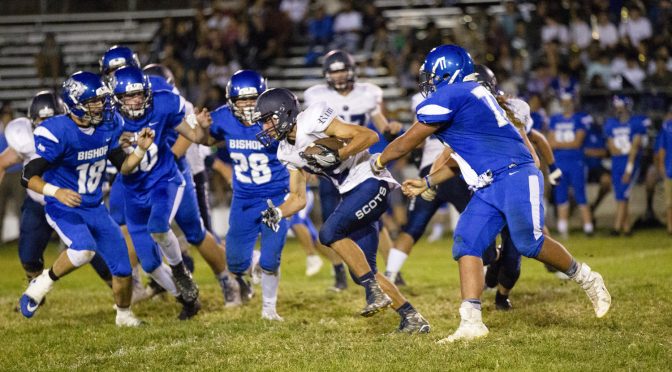 The Bishop Broncos played host to the Rim of the World Scots on Friday evening. IN the Junior Varsity game, the Broncos JV Team continues to dominate. The Broncos defeated the Scots 36-6 to pick up their 3 win and go 3-0 in the early season. The Broncos scored their first 21 points in the first half of play. With the win, the Broncos have outscored their opponents 77-6.

In the Varsity game, it was another defensive battle for the Broncos. Rim of the World came out, on fire, in the first quarter scoring their first touchdown on the second play, from the Scots first possession, as Running Back Debendictis, would rush in to the end zone from about 60 yards out to the Scots the early lead. The point after attempt was good and it was 7-0 Rim of the World. Quarterback, Clay Omohundro would come into the game and after pushing the Broncos close to the goal line would set up one last play. With the clock at 5.1 seconds Omohundro would bring the Broncos to the line and drop back for a pass and connect with Steven Paco in the back of the end zone. The point after attempt was good by kicker Christian Morales and we would go into half time tied at 7. The game would remain tied going into the fourth quarter until Rim of the World would get a rushing touchdown, from about 5 yards out, to give the Scots the win. The Broncos drop to 1-2 in the early season. Clay Omohundro would pass for 83 yards on the night. Luke McClean led the Broncos on the ground with 8 carries for 26 yards and Steven Paco would carry 3 times for 13 yards. Through the air, the Broncos were led by McClean with 38 yards, Jayden Braithwaite 31 yards, Luis Esparza 26 and Paco had 16 with the Broncos sole touchdown. Defensively, Darren Dondero had 15 tackles on the night, Tristan Valle had 12, Kade Edminston 11 and Manny Talaveras and Wesley Pettet each added 9. Coach Palu said, “Great effort by the Broncos. RIM is a very good, physical team and we battled them to the finish. I’m really proud of our effort. We have another tough game this week as Whittier Christian come to town”.

Since Whittier doesn’t have a JV team this year, the JV’s will be heading to Delano on Thursday to pick up a game. So, there will only be a Varsity game this Friday night at 7pm.