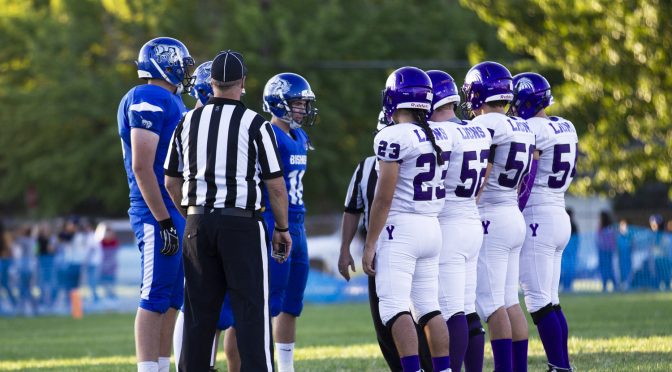 The Bishop Broncos hosted the Yerington Lions, on Friday, in football action. In the Junior Varsity game, the Broncos improved their early season record to 2-0 as they would,once again, dominate the game. The Bronco JV squad logged 21 unanswered points, all in the second quarter, in their rout of the Lions. In their two early season games the Bronco JV Team has scored 47 points while opponents have yet to score any.

In the Varsity game, it was another defensive battle by both teams. The game was scoreless until just under nine minutes remaining in regulation when Luke McClean would run it in, from about 3 yards out giving the Broncos the lead 6-0. Kicker Christian Morales would make good on the point after and the Broncos led 7-0. With just over six minutes remaining in the game, Lions Dante Reviglio would recover on a Broncos offensive turnover and rush it in. The point after attempt was good and the game would end in regulation tied at 7. That set up overtime. Neither team was able to score in the first two overtimes and led to overtime number three. The Broncos would have the ball, first, with an opportunity to score from 25 yards out. However, the Lions defense was stubborn and held the Broncos scoreless, in overtime. The Lions were able to work their way towards the end zone and Running Back Steven Keats would get the game winning score rushing it in from about 4 yards out. Coach Arnie Palu said “ Another outstanding defensive effort, but Yerington managed a defensive score of their own in the 4th quarter to force overtime. We played 3 overtimes with the Lions breaking through for the win. I’m proud of my kids effort.” Wesley Pettet, also, led the Broncos with 12 tackles and Senior Patrick Flanigan had one sack on the night.

The Broncos will have a bye this week and get ready to host Rim Of The World on Friday, September 7th.