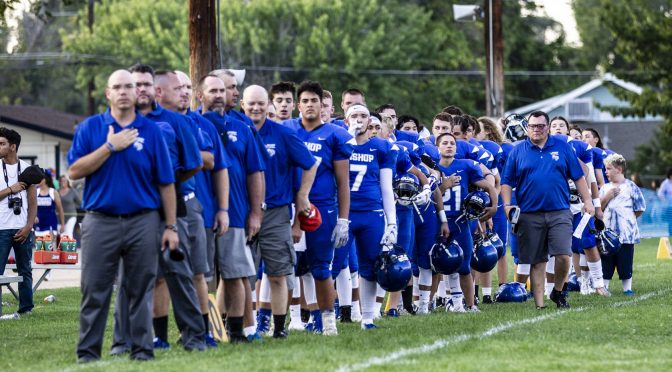 Both the Bronco Varsity and Junior Varsity football teams hosted their first home games of the 2018 football season on Friday against Ontario Christian. In the Junior Varsity game it was all Bishop as the Broncos would dominate the game and shutting out Ontario Christian Knights 26-0. The Varsity game was a hard fought defensive battle. The Broncos switched Junior Luke McClean and Sophomore Clay Omohundro at quarterback throughout the game keeping the Ontario Christian Knights on their heels. Omohundro was 4 for 9 for 27 yards and McClean was 2 for 2 for 2 yards. McClean led the Broncos on the ground with 17 carries for 129 yards, followed by Steven Paco carries 5 time for 24 yards. Both teams had opportunities, early in the game, to score but defenses were able to hold. Ontario Christian would go for a field goal attempt in the first half, but, the Broncos blocked the attempt. The only score of the game came with 9:28 remaining in the fourth quarter, when Luke McClean would run the ball in from 11 yards out on a quarterback keeper. The point after attempt was no good. The Broncos will now host the Yerington Lions this Friday evening. Junior Varsity game is at 4 with the Varsity Game at 7. Pre-game air time on 1230 AM KBOV will be at 6:50.