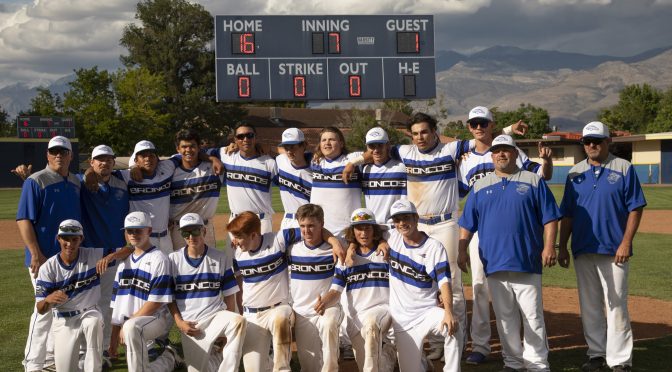 In front of a huge home crowd, the Bishop Bronco Varsity Baseball Team hosted the Riverdale Cowboys in the semi-final game of the Central Section CIF Les Schwab Boys Baseball Championships Division 6. The Riverdale Cowboy went ino the game ranked #5 and the Broncos the #1 ranked team.

After the Cowboys were retired, in order in the top of the first inning, the Broncos would score twice in the bottom half of the inning. Justin Yates would start off by getting a walk, followed by Mike Kubiak getting on base. With two outs, Lorenzo Parra would get a single allowing Yates to come around and score the first run of the game. Next up was Cal Omohundro who would hit a double to center bringing Kubiak around to score. At the end of the first inning, the Broncos had the lead 2-0.

After being retired, in order in the second inning, the Broncos would explode at the plate scoring an incredible 12 runs in the third. Justin Yates would get another walk to lead off the Broncos. Mike Kubiak stepped up and hit a double to deep left center, scoring Yates. Brody Maloney, who had five hits in the victory against Kern Valley in the second round game, continued with his hitting ways by smacking a double to the opposite field, which allowed Kubiak to cross the plate. Lorenzo Parra would get his second hit of the game, with a single to center, and Maloney came home.

After Cal Omohundro singled, advancing Parra to third base, Mike Molina would get a walk to load the bases for the Broncos. Jalen Watterson would get the first of his three hits, in the game, with a single to left center which brought Parra home. Hunter Beal followed with a single and Molina scored. After Yates struck out, in his second plate appearance of the inning, Mike Kubiak would step up to the plate.

With a 2-0 count, Kubiak would blow the game wide open when he hit a grand slam home run that landed on the top of the old Library building. With that hit, the Broncos lead was 12-0. The Broncos would add two more runs in the inning and go to the fourth inning leading 14-0.

In the Top of the fourth inning, the Cowboys would get three hits and score their only run of the game.

Going to the bottom of the fifth inning, with the score 14-0, the Broncos would add two more runs. With one out, Mike Molina would get a single and bring to the plate Jalen Watterson. Watterson, facing a 1-3 count, smacked his next pitch over the fence in right field, scoring him and Molina.

Justin Yates started on the mound for the Broncos with a strong performance striking out 5 batters, no walks and giving up just 4 hits. Austin Thomas would come in to close the game in the top of the 6th inning. He would face 8 batters, striking out 4, and giving up just three hits, ending the game with a strike out to give the Broncos the golden ticket to the Championship game.

The Bishop Broncos will face the Lindsay Cardinals, the number two ranked team, for the Championship on Saturday in Visalia. Lindsay defeated Roosevelt, Tuesday, 15-2.

We will broadcast the game for you on 1230AM KBOV and online at https://www.kibskbov.com Game time is yet to be determined.