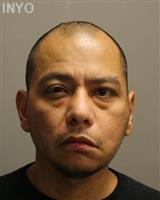 FOR IMMEDIATE RELEASE
On September 6, 2017 an Inyo County Jury convicted Bishop-area resident Raymond Bencoma of four counts of felony assault with a firearm arising out of an incident that occurred in the early morning hours of August 26, 2016. Under California law, these charges are classified as serious felonies. Mr. Bencoma was charged under a specific section that alleged assault on peace officers with a firearm. “It appears that the jury, based on the evidence in the case, did not believe that Mr. Bencoma knew or reasonably should have known that the individuals he was assaulting were peace officers—but they found beyond a reasonable doubt that he was assaulting human beings, and knew it”.
The evidence presented showed that the officers approached Mr. Bencoma during the course of a domestic violence investigation. It was dark, and for officer and public safety reasons, they did not announce their presence as police officers, and used minimal lighting. This is well-accepted police practice for approaching a known dangerous individual suspected of a violent crime, but it may have created some doubt about the identity of the individuals assaulted.
On September 7, following the jury’s guilty verdicts, the case returned to court for a court or bench trial before the Honorable Brian Lamb on the issue of whether or not Mr. Bencoma had suffered three prior convictions of serious and/or violent felonies. The Judge found those allegations to be true, and the matter set for sentencing on October 19, 2017. Final sentencing decisions are always made by the presiding judge, but Mr. Bencoma is facing a potential sentence of 25 years to life on each of the four assault with a firearm counts. Mr. Bencoma was previously convicted of being an ex-felon in possession of a firearm and an ex-felon in possession of ammunition.