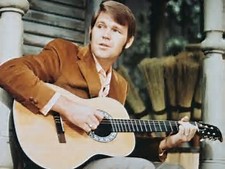 Glen Campbell, whose weekly network television show, The Glen Campbell Goodtime Hour, introduced country music to millions of Americans, has died at age 81 after a struggle with Alzheimer’s disease.

Glen Travis Campbell was born April 22, 1936, into a poor sharecropping family near Delight, Arkansas. He began learning to play guitar when he was 4 years old and by 10 had become proficient on the instrument. During his teens, he quit school to play in his uncle’s Western swing band and afterward formed his own group, the Western Wranglers.

In 1960, Campbell moved to Los Angeles and quickly became lead guitarist for the Champs, an instrumental group that had scored a No. 1 hit two years earlier with “Tequila.” Campbell worked with the band for a year and played on its 1962 Top 40 single, “Limbo Rock.”

Signed to Crest Records, Campbell debuted on the pop charts in 1961 with “Turn Around, Look at Me.” That song peaked at No. 62.

The following year, Campbell moved to Capitol Records, where he would remain for the next 18 years and enjoy his biggest hits. (After recording for other labels, Campbell returned intermittently to Capitol and its affiliate labels during the 1990s and early 2000s.) His first country chart single, “Kentucky Means Paradise,” recorded with the Green River Boys, came in 1962 and went to No. 20.

Campbell broke into session work in Los Angeles as a result of recording demos with future producer Jimmy Bowen — at $10 a song. Impressed by Campbell’s guitar work and vocals on the demos, producers began booking him for master sessions.

During the early to mid-’60s, Campbell recorded with such luminaries as Frank Sinatra, Dean Martin, the Righteous Brothers, Elvis Presley, Nat King Cole, Rick Nelson, the Mamas & Papas, Bobby Darin and the rising country star Merle Haggard. At various times between 1964 and 1967, he also toured and recorded with the Beach Boys.

Campbell came into his own as a crossover recording artist in the latter half of the 1960s. His 1967 recording of John Hartford’s “Gentle on My Mind” earned him two Grammys, even though the single peaked at No. 30 on the country charts and No. 39 on the pop charts. He won three more Grammys for his recording of Jimmy Webb’s “By the Time I Get to Phoenix,” including the album of the year Grammy in 1968.

Both recordings would later be inducted into the Grammy Hall of Fame: “By the Time I Get to Phoenix” in 2004 and “Gentle on My Mind” in 2008.

The advent of The Glen Campbell Goodtime Hour, which began airing on CBS-TV in January 1969, vaulted Campbell to superstardom. “At the time, it was the bridge between country and pop,” he told an interviewer. The singer’s sunny disposition and musical eclecticism set the tone for the series, which, until it ended in June 1972, paired him with the likes of Ray Charles, Willie Nelson, Johnny Cash, Dionne Warwick, Anne Murray, Linda Ronstadt, John Hartford, Cher, B.J. Thomas, Ricky Nelson, Bobbie Gentry, Jerry Reed, the Smothers Brothers, Roger Miller and dozens of other contemporary talents.

His popularity led to Campbell’s roles in the movies True Grit (1969) and Norwood (1970). As a recording artist, he continued to have more success on the country than on the pop charts. The former yielded him four Top 5’s and three Top 10’s between 1970 and 1975, when “Rhinestone Cowboy” exploded; the latter only one Top 10.

Campbell’s charted his last pop single – “I Love My Truck” — in 1981 but triumphed through the rest of that decade with such high-flying country hits as “A Lady Like You,” “It’s Just a Matter of Time,” “The Hand That Rocks The Cradle,” “Still Within the Sound of My Voice,” “I Have You” and “She’s Gone, Gone, Gone.”

Campbell married four times and is the father of eight children. His affair with and subsequent third marriage to Mac Davis’ former wife landed him in the tabloids, as did his affair with the much younger Tanya Tucker in the early 1980s and his brush with the law for drunk driving in 2003.

Campbell married Kimberly “Kim” Woollen in 1982. Their three children — Cal, Shannon and Ashley – are accomplished musicians who worked in his touring band beginning in 2010.

In 2005, Campbell was inducted into the Country Music Hall of Fame, an honor he called “one of the biggest highlights of my life.”

Campbell returned to Capitol Records to release his 2008 album, Meet Glen Campbell, which featured his recordings of songs from U2, Tom Petty & the Heartbreakers, Jackson Browne, and Foo Fighters and Green Day.

In June 2011, he announced that he was afflicted with Alzheimer’s disease and would begin his final tour later that year. The tour coincided with the August 2011 release of Ghost on the Canvas, a farewell album featuring songs written by Jakob Dylan, Teddy Thompson and the Replacements’ Paul Westerberg.

With the full support of Campbell’s wife Kim, performances from the final tour are featured in the 2014 documentary, Glen Campbell: I’ll Be Me, which also documents the challenges he and the family faced as his Alzheimer’s symptoms became more severe. Campbell and songwriter-producer Julian Raymond’s “I’ll Be Me” was nominated for best original song at the 2015 Academy Awards.

In recent years, Campbell resided at a memory care facility in Nashville.

Edward Morris is a veteran of country music journalism

Rest in peace, Rhinestone Cowboy. You are a true country music legend, and you will be missed. 🙏