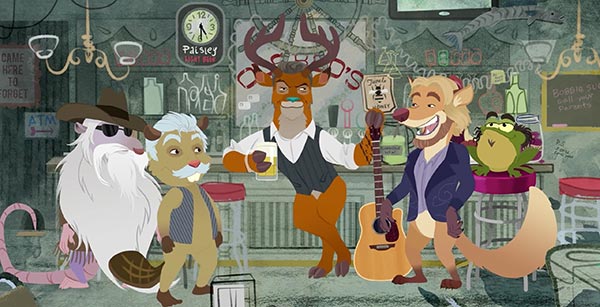 NASHVILLE, Tenn. – The Oak Ridge Boys morph into animated characters in Blake Shelton’s new video “Doing It to Country Songs,” which features Blake as “Buck Shelton” and as a William Lee Golden as possum, Joe Bonsall as a beaver, Duane Allen as a fox, and Richard Sterban as a frog.

The animation portrays all of them as ““Blake Buck & the Oak Ridge Boys” at the fictitious Blake Shelton Bar & Grill on Some Beach. “Doing It to Country Songs” appears on Shelton’s 2016 album If I’m Honest. Watch here.https://www.vevo.com/watch/blake-shelton/doing-it-to-country-songs-(feat-the-oak-ridge-boys)/USWBV1700747

Currently, the Country Music Hall of Fame members are crisscrossing North America with a bevy of tour dates (see below).

Since the start of their highly decorated career, The Oak Ridge Boys have achieved five GRAMMY® Awards, and multiple CMA, ACM and Dove Awards for their cross-over brand of pop, country and gospel music that spans multiple generations.