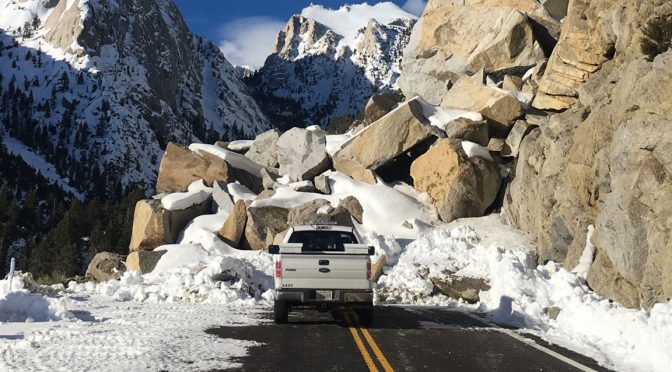 Substantial snowfall from an atmospheric river event in mid-January has led to a major rock fall on Whitney Portal Road, causing significant damage to an approximately 100-foot stretch of road. This damage may delay the re-opening of the road this spring.

Initial assessments by Inyo County, Cal Trans, and Inyo National Forest indicate that there will be approximately two months of work that include blasting and clearing the rock, and stabilizing and re-building the road bed. Road construction will not begin until after the permitting process is complete.

The road is currently gated just above Hogback Road on Whitney Portal Road to prevent vehicle entrance; however, foot traffic past the gate is not recommended due to the hazardous and potentially unstable conditions surrounding the rock fall.

For now, the area remains under snow and there is no clear estimate of when the removal operations will begin. Continued winter storms as well as the concerns for the stability of the slide area during the spring freeze/thaw cycle make it difficult to predict when this work can safely begin.

The Whitney Portal Road often opens by May 1st, conditions permitting, and that is also the beginning of the Mt. Whitney Lottery for day and overnight hikes. Every effort will be made by all parties involved to have the road open by this date.

While the road is under construction, access to Mt. Whitney is via the Whitney Portal National Recreation Trail (NRT) or from other trailheads such as Kearsarge Pass or Cottonwood Pass. The NRT will close for public safety when blasting is underway.

This winter has brought substantial snow to the Sierra Nevada. Snow should be expected along the trail through early summer and hikers will be required to have technical skill and equipment to access Mt. Whitney in the early season.