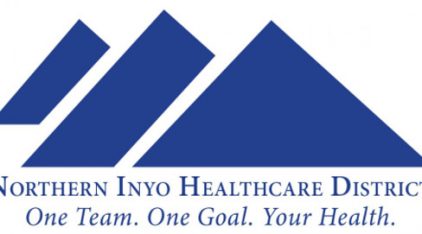 According to Barbara Laughon at NIHD, a budding partnership between Northern Inyo Healthcare District and Bishop Union High School that could give students access to on-campus healthcare took center stage at Wednesday evening’s NIHD’s Board of Directors meeting.
An unexpected offering of thanks from BUHS Football Coach Arnie Palu set the tone for the evening. Speaking during the public comment session of the meeting, Palu offered thanks to the healthcare district and specifically Orthopedic doctors Mark Robinson and Richard Meredick, who for the past several seasons volunteered their time to serve as the team’s sideline doctors during home games.
“This is one of those services that we’ve had for so long that we get a bit complacent about how fortunate we are to have it,” Palu said. “But when we go to other schools and don’t have a sideline doctor, then we realize how great we have it here, so from all of us at Bronco Football, we publicly want to thank Drs. Robinson and Meredick and the District for their support.”
As for on-campus healthcare, NIHD’s Chief Executive Officer Kevin S. Flanigan, MD MBA, said BUHS and NIHD officials have been discussing an opportunity to develop a program that would place a certified healthcare provider on campus one or two days a week. Students could access the provider throughout those days for state-authorized healthcare issues.
While this already has been discussed at two different BUHS Board of Education meetings, this was the first time it came before the NIHD Board. After the meeting, Dr. Flanigan noted that this was a natural next step. “It is important to get board approval to move from the concept phase to the development phase,” he said.

BUHS Superintendent Barry Simpson told the NIHD Board that the school’s current healthcare clerk can do some things for the students, such as managing diabetes medications and providing First Aid.
“But the idea that we could actually have a healthcare professional on-site where our students can come on their turf and speak to the professional about those things that they are often too afraid or too nervous to talk to anyone else about is an exciting opportunity that we would want to support,” Simpson said.
Simpson noted the school board had made no final decision of any kind on this issue. “This is a big proposition for our community, and we want to do this slowly and make sure our parents are aware of the topics surrounding this idea.”
In an interview following Wednesday’s meeting, Dr. Flanigan said, “NIHD could not be more proud to build upon our mission statement of ‘One Team, One Goal, Your Health.’ Now as we build upon our teamwork with the school district, we gain the opportunity to improve healthcare access to our communities’ adolescents and therefore their health.”