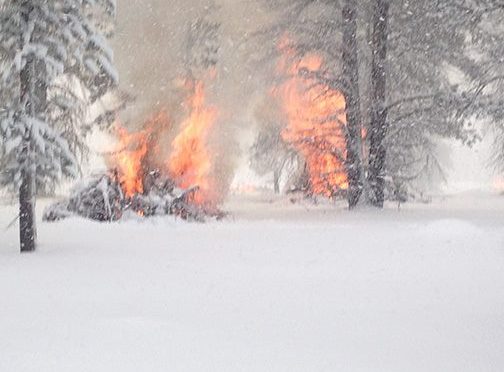 Fire crews continued pile burning near Smokey Bear Flat on Tuesday.  According to Deb Sweizer at Inyo National Forest, crews were working with the Great Basin Unified Air Pollution Control District to take advantage of favorable wind dispersal.  Crews were expected to complete up to 51 acres.  Since this burn unit is close to Highway 395, motorist should plan to see smoke in the area and should slow down for firefighters along the road corridor.

In June Lake crews will burn up to 5 acres between Fern Lake Trailhead and over to the Double Eagle Lodge.  If condition remain favorable, crews will also be looking to complete 4 acres of piles near the Peterson Tract.

In Mammoth Lakes crews will burn up to 164 acres of piles over the next 2 days along Sherwin Creek Road near the Sherwin Creek Campground.  Expect to see smoke from both June Lake and Mammoth Lakes, as well as along major roadways including Highways 395, 158, and 203.

The piles were created as part of a fuels reduction plan to remove ladder fuels that could carry fire from the forest floor up to the canopy.  The main focus is community protection from wild fires.